The Nanavati Trial: Things you Don’t Know About! 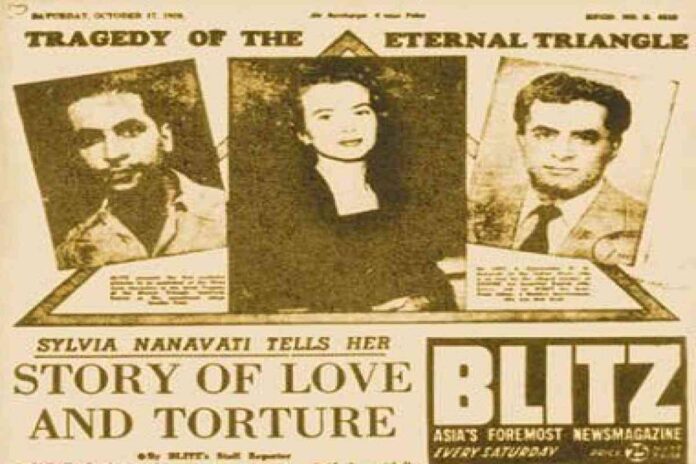 The Nanavati Murder Case is India’s one of the most famous cases. The Judgment in Nanavati Case came in the year 1961 but it remains a topic of discussion even today.

K.M. Nanavati was a naval officer who was put under trial under section 302 of the Indian Penal Code for the alleged murder of his wife’s lover.  This case is considered to be one of the important landmark judgments not just because of the popularity it gained amongst the masses but because of the important legal points, it raised such as plea of general exception, the burden of proof, grave, and sudden provocation test, and power of the high court in deciding the competence of reference made by Sessions Judge.

It had been alleged that Commander Nanavati had murdered his wife’s lover by firing 3 back-to-back shots from his licensed service pistol. Nanavati however denied the allegations by taking a stand of self-defense. What followed was a thrilling trial.

The trial received unprecedented media coverage and inspired several books and films such as the 1973 film Achanak, the 2016 film Rustom, and The Verdict’s 2019 web series.

The case in brief:

Kawas Manekshaw Nanavati was a Commanding Officer in the Indian Navy who had settled down in Bombay with his wife, Sylvia, and their two sons and a daughter. As Nanavati used to be away from home frequently due to his Naval Assignments, Sylvia developed an illicit relationship with Ram Ahuja, a Sindhi businessman and a good friend of the Nanavati family.

On 27 April 1959, Commander Nanavati found about the illicit relationship of his wife with his Sindhi friend Prem Ahuja. On the same day, Nanavati headed straight to confront Prem Ahuja. Nanavati went to the Naval base, collected his pistol on a false pretext from the stores along with six bullets, completed his official duties, and proceeded to Prem Ahuja’s office. On not finding him there, he went to Ahuja’s flat and found him there.

According to Nanavati’s account related in court, there was a verbal confrontation between the two men; according to Nanavati’s account related in court, he had asked Ahuja whether the latter intended to marry Sylvia and accept their children. After Prem replied in the negative, three shots were fired and Prem Ahuja dropped dead. Nanavati headed straight to confess to the Provost Marshal of the Western Naval Command and, on his advice, turned himself over to the Deputy Commissioner of Police.

He was then tried before a 9 member Jury which acquitted Commander Nanavati from the Murder Charges with an 8-1 majority. The Sessions Court Judge, Justice R.B. Mehta, however, considered the acquittal as perverse and took a historic decision of overturning the jury’s decision. He referred the case to the Bombay High Court for a retrial.

The Bombay High Court overturned the Jury’s Decision and found Nanavati guilty. He was sentenced to life imprisonment.

1.  Nanavati Case was not the last Jury Trial in India:

It is commonly believed that the Nanavati trial was the last Jury trial. It is falsely believed that due to a perverse judgment given in the Nanavati Case, the Jury was abolished in India after it. However, the history of the jury trial in India suggests that Jury Trial in the Nanavati Case was not the last one. In July 1963, for example, Mannalal Khatic was tried before a “special” jury in the Calcutta High Court. In September 1964, Panchu Gopal Das was convicted of murder by a jury’s unanimous decision and sentenced to life imprisonment. In December 1963, the Madras High Court heard an appeal from a jury trial held in Karaikal (Puducherry) shortly after the territory was incorporated formally into India.

2.  Commander Nanavati was not acquitted:

In Akshay Kumar’s ‘Rustum’ Movie, Nanavati has been shown to be acquitted in the end. This is however not true as the movie is a fictionalized version of the Nanavati case. Commander Nanavati had been acquitted from the Murder Charges with an 8-1 majority by the Jury at the Bombay Sessions Court. The then Sessions Court Judge, Justice R.B. Mehta, however, considered the acquittal as perverse and took a historic decision of overturning the jury’s decision. He referred the case to the Bombay High Court for a retrial.

3.  Communal angle in the case:

A communal angle played a significant role in the case. The Nanavati first came into the limelight when the weekly tabloid Blitz, owned by R. K. Karanjia, a Parsi, publicized the story, published exclusive cover stories, and openly supported Nanavati. They portrayed him as a wronged husband and upright officer, betrayed by a close friend. Blitz painted Nanavati’s image, like that of a man representing the ideal middle class. On the other hand, the weekly portrayed Ram Ahuja as a spoilt businessman and a playboy. This created a polarization in the Parsi and Sindhi communities. The Parsi Community lobbied for Nanavati while the Sindhi community stood by deceased Prem Ahuja’s sister, Mamie Ahuja.

The lobbying from both sides and sympathy of the public for Nanavati largely influenced the decision of the Jury which found Nanavati ‘Not Guilty.

4.  Sylvia’s English Origin and her stand during the trial:

Sylvia, the wife of Nanavati was an Englishwoman. They first met in her hometown in England where Nanavati had come for his Naval Training. She was merely a teenager when she met Nanavati. They both fell in love in no time. They decided to get married in Bombay in the 1940s era. Sylvia accepted her mistake at the very beginning of the trial and stood by Commander Nanavati’s side throughout the trial. After being pardoned from the sentence, Commander Nanavati along with Sylvia and their children settled in Canada. Commander Nanavati passed away in the year 2003. Sylvia has been a widow ever since.

Nanavati had moved in the same social circles as the Nehru-Gandhi family for many years. Nanavati had grown close to the Nehru’s during the 1940-50s. During the time of Nanavati’s trial and sentencing, Jawaharlal Nehru was Prime Minister of India, and his sister, Vijayalakshmi Pandit, was governor of Bombay state. After spending three years in imprisonment, a Pardon was granted to Nanavati. The Pardon came after an application seeking pardon to Nanavati came from Mamie Ahuja, the sister of deceased Prem Ahuja. Mamie agreed to seek pardon for Nanavati due to the joint efforts of Governor Vijayalakshmi Pandit and senior Lawyer Ram Jeth Malani.