What is Zero FIR? How is it Different from FIR? 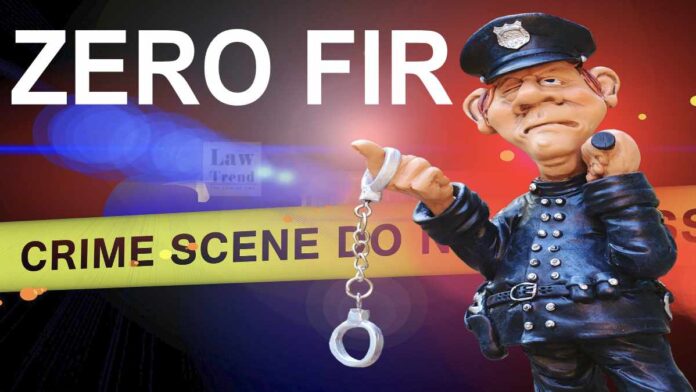 FIR or First Information Report is the information given to a police officer by an informant which is recorded by the police in writing as per the provisions of Section 154 of the Code of Criminal Procedure, 1973.

FIR has not been defined under the CrPC but must be understood in the context of the provisions under Section 154.

It is a document prepared by the police on the basis of information provided to them regarding the commission of a cognizable offense.

Any person who has knowledge of the commission of cognizable offense can lodge an FIR. The person lodging FIR can be a victim or a witness or anyone who has the information regarding the offense.

The concept of Zero FIR came into public domain in the year 2012 due to the brutal Gang Rape of Nirbhaya in Delhi. Justice Verma Committee was constituted after the brutal gang-rape case of Nirbhaya. The committee recommended amendments to the Criminal Law so as to provide for speedy trial and enhanced punishment for criminals accused of committing sexual assault against women. Zero FIR was harped in the report submitted by the Justice Verma committee.

Zero FIR can be lodged at any police station irrespective of the place of commission of crime and jurisdiction. This FIR would be then transferred to the police station of appropriate jurisdiction subsequent to a preliminary investigation.

The main objective of the zero FIR was to put a legal obligation on the police to begin an investigation and take quick action without the excuse of the absence of jurisdiction.

The Supreme Court in the case of Lalita Kumari v. Government of U.P. observed that the police machinery is duty-bound to register an FIR under Section 154 of the complaint is related to a cognizable offense.

In the case of State of Andhra Pradesh v. Punati Ramulu and Others, the Supreme Court held the police constable guilty for refusing to lodge a zero FIR by the informant who was the nephew of the deceased and an eye witness of the crime on the grounds of jurisdictional limitations.

How is it Different from FIR?

FIR is different from Zero FIR. A Zero FIR becomes FIR when it’s lodged/registered by a Police Station of competent territorial Jurisdiction. The Trial proceeds on the basis of FIR. An FIR cannot be converted into Zero FIR but vice-versa is permissible.

Thus it can be concluded that the main aim of zero FIR is to enhance the jurisdictional power of the police to curb criminal acts in India. On one hand, it empowers the Police while on the second hand it increases their duties too!

Centre Sitting on Recommendations of Collegium is Deadly For Democracy: Justice RF Nariman

Five Names Recommended by Collegium for SC Judges To Be Cleared Soon: Centre to SC