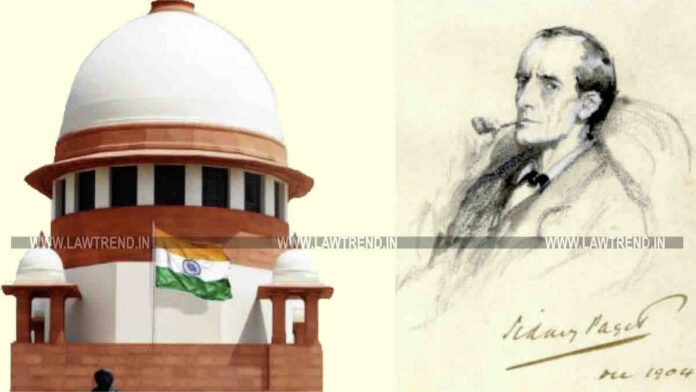 The Supreme Court referred the Sherlock Holmes quote “You see but you do not observe” while hearing a murder case.

The appeal against the conviction and sentence of life imprisonment has been rejected.

The Supreme Court dismissed the ‘Amicus Curiae’s assertion that the four eyewitnesses could not see the murderer’s face at night.

“We do not find any cause to interfere with the order given by the High Court.” As a result, the extraordinary leave petition is dismissed.

You see but you do not observe

During the hearing, Counsel Piyush Kanti Roy, who was appointed ‘Amicus Curiae’ in the case, stated that it was a deserted area and a dark night, and that four eyewitnesses could not see the petitioner’s face.

To this Justice Nariman observed:

‘It’s as if Sherlock Holmes said to Dr Watson, ‘You see but you do not observe,’ stated Justice Nariman.

Roy stated that his primary goal is to ensure that an innocent person is not punished for an offence he did not commit.

The bench responded, “You are addressing something that has already been debated.” You have gone above and beyond the role of amicus curiae. ‘Everything is very clear.’

The Supreme Court was hearing an appeal filed by Mukesh, who had challenged the Rajasthan High Court’s decision. Mukesh was convicted and sentenced to life imprisonment by the trial court for the murder of Gopal Lal of his village on July 18, 2012.

The Appeal filed by Mukesh was dismissed by the Rajasthan High Court.

Mukesh stated in his appeal that he had been wrongfully implicated in the case and that no case had been made out against him under section 302 of the Indian Penal Code (IPC).

According to the prosecution, on July 19, 2012, Babulal filed a complaint with the police station claiming his younger brother was on his way to his village from Bhanpur at around 10-11 p.m. on July 18, 2012, when the locals informed him that Gopal Lal had been detained by three individuals.

Babulal stated that when he arrived at the scene with the locals, he saw that his brother had already been stabbed by three men.