What is the Tax Liability of Advocates Under GST Act? 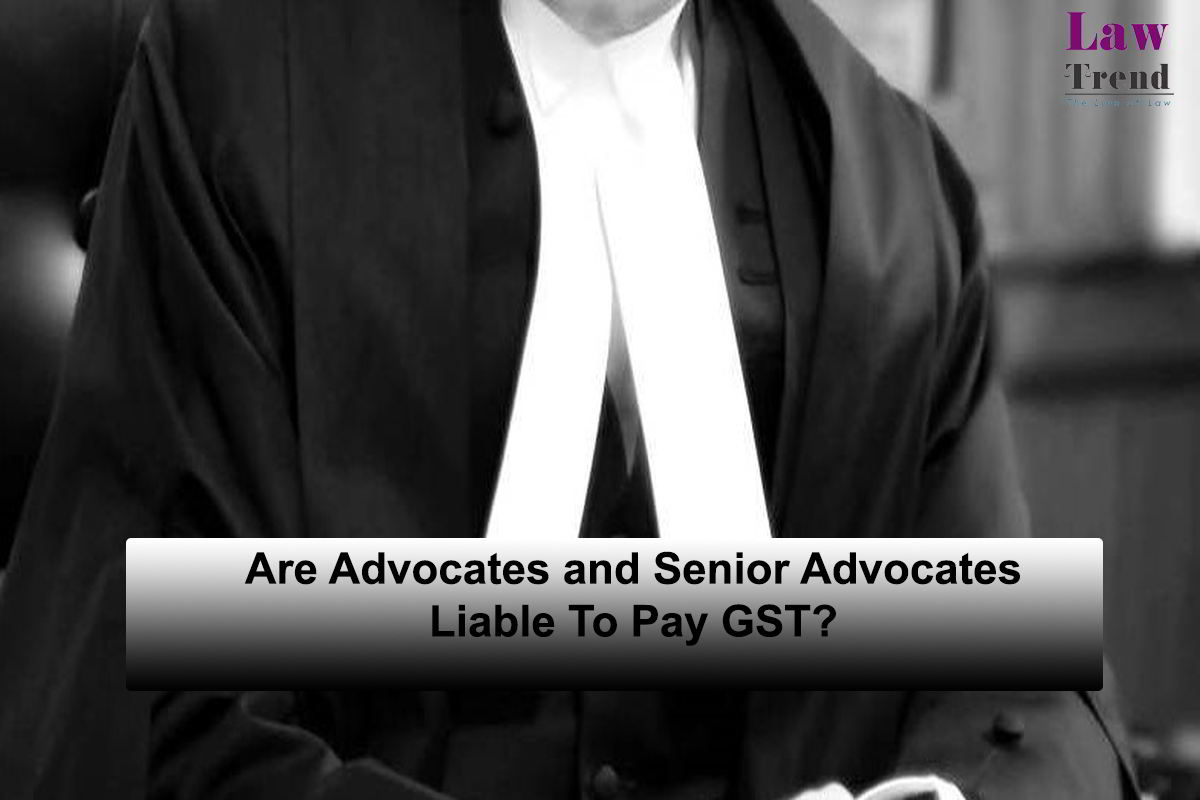 Who is an advocate and Senior Advocate?

“Advocate” means an advocate entered in any roll under the provisions of this Act;

Advocate enrolled means advocate whose name is listed in the register of advocates prepared by the Bar Council of respective States.

However, foreign lawyers are not treated as an Advocate in India, as they are not enrolled with the Bar Council of any State.

Section 16 of the Advocates Act 1961 provides that the Supreme Court or the High Court considering the ability, standing at the bar, experience and knowledge, may designate an advocate as Senior Advocate.

How are Advocates different from Lawyers?

Advocates are quite different from lawyers, as Lawyers are not registered in the Bar Council of States. Advocates can represent a client in the court of law, Plead their case, etc.

Every law graduate is a lawyer, but unlike advocates, lawyers are not required to be registered with the Bar Council of any State. Lawyers can give a legal opinion but are not allowed to represent a client in a court of law.

Is Legal Service a Taxable Supply?

Let us understand the meaning of “Legal Service”.

“Legal Service includes the rendering of any service in the conduct of any case or other legal proceeding before any court or other Authority or tribunal and the giving of advice on any legal matter.”

“legal service means any service provided in relation to advice, consultancy or assistance in any branch of law, in any manner and includes representational services before any court, tribunal or authority;”

Section 9 of Central Goods and Services Tax Act 2017 empowers the Central Government to notify any Service or Goods or both, on which tax shall be paid on Reverse Charge Basis.

Entry No. 2 of the aforesaid notification provides:

“Services supplied by an individual advocate including a senior advocate or firm of advocates by way of legal services, directly or indirectly.”

Are GST Exemption Available to Advocates?

Whether Senior Advocates are Liable to pay GST?

For Senior Advocates as per the Notification No. 13/2017- Central Tax (Rate) dated 28.06.2017 services supplied by an individual advocate including a senior advocate by way of representational services before any tribunal, court or Authority, directly or indirectly, to any business entity located in the taxable territory shall be charged on Reverse Charge Basis.

Therefore, if the senior advocate provides services to advocate or advocate firm, services are not exempt and shall be liable under Forward Charge Mechanism (FCM)

Are Advocates Required to get GST Registration?

As per Notification No. 5/2017 – Central Tax, the Advocates are exempted from GST registration if supplies are covered under Reverse Charge Mechanism. But, where the advocate or advocate firm has any other taxable income and aggregate turnover exceeds Rs. 20 lakhs then it is mandatory to take GST registration

What is the Rate of Tax?

As per the Government Notification the tax Rate on Advocate Services is 18%.

In the case of J.K. Mittal and Co vs Union of India (W.P. (C) 5709/2017) before the Delhi High Court, the Government of India clarified that legal services are taxable under Reverse Charge Mechanism.  But concerning Senior Advocates, there is a need for proper clarification from the Government.

Recently the Orissa High Court has issued directions to the Commissioner GST to clearly instruct all the officers in the GST Commission to not to issue any notice for liability under GST Act to practising lawyers.

Similarly the Bombay High Court has also tayed a demand notice issued by Assistant Commissioner of Central Goods and Service Tax (GST) seeking to levy a tax (service) on a lawyer for providing legal services.

From the above discussion, it can be safely concluded that Advocates are not liable to pay tax under the Central Goods and Services Tax Act, 2017. However, where the services have been provided to a business entity having a turnover of more than Rs. 20 lakh, then tax shall be payable under the Reverse Charge Mechanism.

Government should come up with a clear stand with respect to liability of senior advocates under GST. Ambiguity is leading to harassment and exploitation of lawyers in the hand of authorities, who can mould the law as per their wish.

Another question can be whether application of GST on legal service to the extent it is applicable, is justified or not.

Lawyers are not allowed to make advertisement of their services, and legal profession is considered to noble.

Constitution and People Will Guide How Country Is Run: Rijiju Reacts on Warning of Supreme Court

Article 226: Petition Filed on the Basis of Mere Apprehensions, Which Is Unfounded, Cannot Be Sustained, Rules J&K&L HC

Maintenance Awarded to a Wife Is Not a Bounty; It Is Awarded to Her so That She Can Survive: Allahabad HC

Whether the Plea of Res Judicata and Constructive Res Judicata Would Apply in Criminal Proceedings? Kerala HC Answers