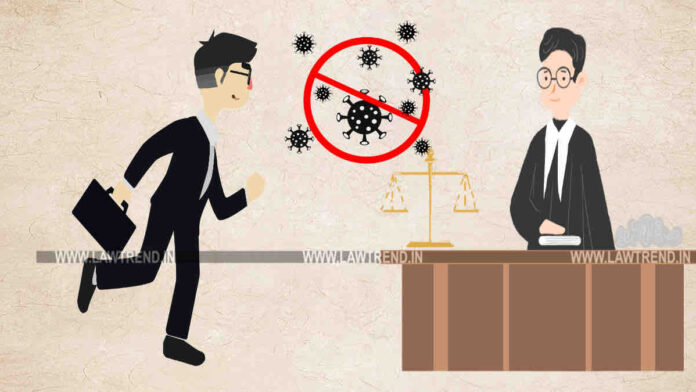 The Legal Profession is called to be Noble Profession, but for the last two years, the Covid-19 pandemic had a significant influence on the legal community, and the consequences are still being felt. The third wave of COVID19 with Omicron variant has arrived in India, which has led to the closure of Physical Access to Courts and restricted functioning in Virtual and Hybrid Environments.

A lawyer is defined as “a person learned in the law; as an attorney, counsel, or solicitor; a person licenced to practise law” by Black’s Law Dictionary.

The practise of law is referred to as a noble profession. It does not remain noble simply by being called thus unless a noble profession is continued, corresponding, and expected to be performed. Its nobility must be preserved, safeguarded, and developed. An institution cannot exist solely on the strength of its name or its former glories.

The biggest issue today with the legal profession is the lack of social and financial security. When the Courts are closed or functioning in a restricted environment, the Judges get their salary, the Court staff get their salary, however, the “so called’ most important pillar or indispensable part of the Judicial Administration is left behind on his own.

In the first and second wave, we have witnessed scenes where the Bar Associations and Bar Councils have to come forward and distribute rations for needy lawyers.

Therefore when “Pandemic” is becoming an “Endemic”, is it not high time to ponder over this bar on advocates.

Where is the Bar?

The lawyers have to manage themselves and their families in these testing times, but the restriction imposed by the Bar Council of India through its Rules prohibit a lawyer to engage in any other business activity.

These restrictions given by the bar council are enumerated from Rules 47 to 52 of Bar Council of India Rules, frames under Advocates Act 1961, provides that:

Advocates are permitted to do the following things:

In the first wave of COVID19, even the Supreme Court of India took cognizance of the pitiable conditions of Lawyers in India in the case of Bar Council of India vs Union of India (Writ Petition(s)(Civil) No(s). 686/2020 ).

The Bench of the then Chief Justice SA Bobde, Justices AS Bopanna and V Ramasubramanian observed that:

We find that the pandemic has taken 3 a heavy toll on the lives of citizens and, particularly, the legal fraternity. We are conscious of the fact that the advocates are bound by Rules which restrict their income only to the profession. They are not permitted to earn a livelihood by any other means. In such a circumstance, the closure of the courts has deprived a sizable section of the legal profession of income and therefore livelihood.

The Supreme Court issued notices to the Union of India, State Governments/Union Territories, Bar Council of India and all the State Bar Councils, but even after the second and third wave, no decision has been taken yet.

Should Bar Council Rethink Over it?

The basic problem appears to be is the term “Business” or “Trade” and to protect the nobility of this profession the Lawyers have been refrained from doing business. A lawyer can be a Parliamentarian or MLA or a part-time Journalist or a Teacher and practice law but he cannot be a shop owner and practice law. It appears that doing business or trade makes the profession less “Noble”.

The current situation of lawyers in India and also considering the fact that lawyers in various other countries are allowed to do business, the Bar Council of India should re-consider this provision and make some room, initially, for lawyers to adopt other sources of income as well to sustain basic necessities of life.

She Now has Courage to Face the Society- Madras HC Grants Probation to Woman Convicted For Attempt to Suicide and Killing Two Daughters by...