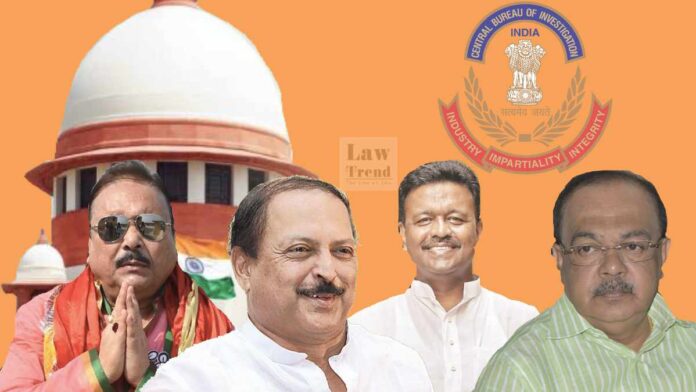 On Wednesday, the Supreme Court heard the appeal of CBI against the Order of Calcutta High Court directing House Arrest of 4 TMC leaders arrested in Narada Sting Case.

Solicitor General Tushar Mehta appearing for the CBI submitted that a huge unruly crowd had gathered before the CBI office which restricted the movements of the officials. These movements seemed to be carefully orchestrated and engineered violence by the mob.

He further said that the Chief Minister and sits in dharna. So does the Law Minister. They are joined as parties before the High Court. They say that they are showing solidarity

The Bench of Justice Vineet Saran and Justice BR Gavai, replied that:

We will make it very clear that we don’t appreciate dharnas. But, if CM or Law Minister takes law into their hands, should the accused suffer because of it ?

The CBI while filing the Plea made a mistake in prayer clause by seeking relief against the order of Justice Rajesh Binda not against Order of Justice Arijit Banerjee.

To this the court said that if this prayer is allowed the accused will be very happy. Mr. Singhvi, appearing for two TMC leaders, laughed and said that he would plead this as his best ground.

Significantly the Bench observed that:

“Special Benches during Vacation are assigned to give liberty. This is the first time we are seeing that they are being used to take away liberty.”

The Bench observed that: We don’t feel the district judiciary is that weak to be influenced like this. We don’t want to demoralise our judiciary.

The bench advised SG Mehta that it would be better to withdraw this appeal against house-arrest order of four TMC leaders in Narada case since the matter is pending before 5-J bench of Calcutta HC.

SG Tushar Mehta said he will consult the CBI and get back to court.

After seeking instructions from CBI, the appeal has been withdrawn.