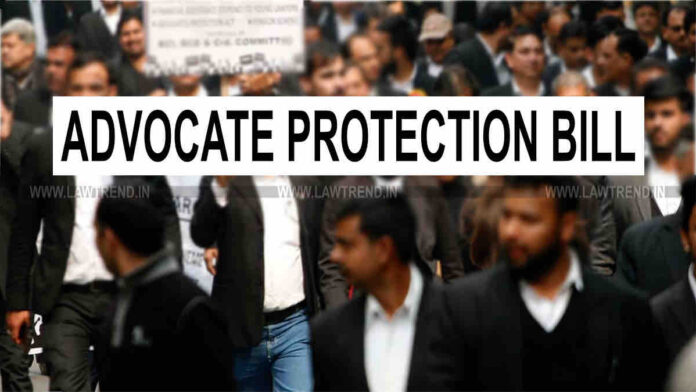 On 2nd July 2021, the Bar Council of India released the Draft of the Advocates Protection Bill 2021. A seven-member committee had been constituted to frame the bill keeping in mind the problem and adversities faced by advocates and their families.

The committee consisted of the following members:

Object of the Bill:

The preamble states that the Bill is for the protection of advocates and their functions in discharge of professional duties. It then states an extensive 9 points of the objectives and reasons for the Bill.

The main reasons for the bill is stated to be the protection of advocates and to remove obstructions in the discharge of their duties. There are various reasons mentioned in the bill that cause obstruction in performance of duties.

The Bill came up also to implement the 8th United Nations Congress on Prevention of Crime and Treatment of Offenders (1990) to which India was a party. It was in this congress that the ‘Basic Principles on Role of Lawyers’ was also adopted. In this declaration, there are clauses that guarantee the functioning of lawyers. It sought to make sure that Governments protect lawyers and they are able to perform their duties.

The recent high rise in incidents of assault, kidnappings, intimidations and regular threats caused to advocates is a major reason. Where the security of lawyers is threatened as a result of their duty, they shall be adequately safeguarded by the authorities.To protect advocates, such an act is necessary. It also states to ensure social security and minimum necessity for life for advocates.

In total, the draft bill locates 16 sections in respect of its objectives.

Under Sec.2 of the bill, the definition of ‘advocate’ is to be the same as in that of the Advocates Act, 1961. There, “advocate” means an advocate entered in any roll under the provisions of that Act.

The same section also defines ‘acts of violence’. These include all such acts committed against the advocates with an intent to prejudice or derail the process of impartial, fair and fearless litigation. These ‘acts’ could be of threat, harassment, coercion, assault, malicious prosecution, criminal force, harm, hurt, injury etc. that potentially impact the living and working conditions of advocates. This also includes loss or damage of property. These offences are to be cognizable and non-bailable.

Sections 3 and 4 talk about punishment and compensations. Punishments can start from 6 months and extend upto 5 years; and for subsequent offence, upto 10 years. Fines start at Rs.50,000 and goes upto Rs.1 lakh; and for subsequent offences fines can go upto Rs.10 lakhs. The Bill also empowers the court to award compensation to advocates for the wrongs committed against them.

Investigation by Officer above the rank of DSP

The bill proposes that the investigation in these offences shall not be done by any person below the rank of Superintendent of Police and must be completed within 30 days of the registration of the FIR. The bill also proposes the right of police protection to advocates, upon proper investigation by the court.

The next important provision in the bill is that of constituting a redressal committee. A three-member committee for Redressal of Grievances of Advocates and Bar Associations has been provided at each level i.e District, High Court and Supreme Court. The head of this committee is to be the head of Judiciary of that level such as District Judge for District Level, Chief Justice or his nominee for High Court level and CJI or his nominee for Supreme Court level.

The appointment of the remaining two members is to be done by nomination by the respective Bar Councils. The president of the Bar Council shall be the Special Invitee at the meetings of the redressal committee.

No suit is to be instituted against a lawyer who has been working in good faith. Communications between the advocates and their clients must be respected; the confidentiality must be protected.

Protection Against Arrest and Prosecution

After hearing the if the CJM finds that FIR has been filed against the Advocate for some malicious reasons emanating from the discharge of official duties of the Advocate then CJM shall grant bail to the Advocate.

Another huge provision made in the act is that of Social Security. The act proposes that the State and Central government have to make provisions to provide financial assistance to all needy Advocates of the country in unforeseen situations such as natural disasters or epidemics. A minimum of Rs.15,000 every month shall be provided.

Section 12 provides that where any public servant having power of investigation or arrest under CrPC is found in possession of or found to use in his investigation any such privileged communication or material which can be shown to be obtained from an Advocate, it shall be presumed that such privileged communication or material was obtained by such public servant by coercion.