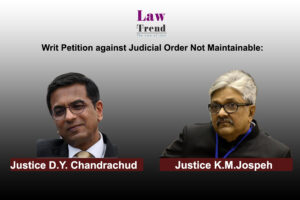 Neelam Manmohan Attavar instituted proceedings under Section 12 of the Protection of Women from Domestic Violence Act 20053. On 30 July 2015, the petition was dismissed by the Metropolitan Magistrate, Traffic Court-II, Bengaluru. On 5 November 2015, in an appeal.’ arising out of the dismissal of the proceedings, the interim relief seeking residence and expenses was initially refused by the Additional Sessions Judge, Bengaluru.

Subsequently, on 19 September 2016 in a petition under Article 226 filed by the petitioner, the Single Judge recognised a right of residence to the petitioner in a house situated at Bengaluru and, on 24 October 2016, directed the withdrawal of the appeal to the High Court. These orders of the High Court became the subject matter of proceedings before the Supreme Court in Civil Appeal Nos 2500 and 2502 of 2017.

On 14 July 2017, the Supreme Court set aside the orders passed by the High Court in regard to residence and for the withdrawal of the appeal to itself. As a consequence of the judgment rendered by the Supreme Court Court, the appeal filed by the petitioner before the Additional City Civil and Sessions Judge was heard on merits and was eventually dismissed by an order dated 17 February 2018.

The petitioner carried the matter in revision which was dismissed by the High Court on 31 July 2018. Challenging the order of the High Court, the petitioner filed a writ petition under Article 226 of the Constitution. The Petitioner/Appellant sought relief that the Judgment of the Single Judge “may be declared void/disabled/ recalled”. The Prayer made is quoted herein under:

Under Article 139A of the Constitution, the Writ Petition was Transferred to Supreme Court on 13.12.2019.

Contention of the Petitioner:

A Bench of Justice D.Y. Chandrachud and Justice K.M. Jospeh after hearing the parties held that: