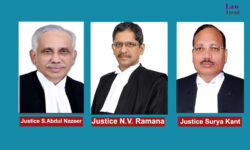 The case that we will be discussing in this post is an interesting one. It will highlight systematic Corruption in government and paramilitary forces, different ways that are used by perpetrators to confound the authorities and how a thorough investigation can reveal all the dark deeds that would have otherwise slipped under the radar.The Court was dealing with a case, where charges of corruption were levelled against a paramilitary official.

In Pravin Kumar Vs Union of India and Ors (CIVIL APPEAL NO. 6270 of 2012), a Bench of Justice N.V. Ramana, Justice S.A. Nazeer and Justice Surya Kant, examined the scope of Judicial Review in Service Matters.

The case that we will be discussing in this post is an interesting one. It will highlight systematic Corruption in government and paramilitary forces, different ways that are used by perpetrators to confound the authorities and how a thorough investigation can reveal all the dark deeds that would have otherwise slipped under the radar.

How the case began!

The case revolves around paramilitary officials who were posted at a BPCL compound in the western zone. Ther date of the incident was 28.02.1999. An inspector, Mr Hiralal Chaudhary, was travelling in a bus near the compound when he noticed that constable Ram Avtar Sharma was carrying a large amount of cash on him. Mr Chasudhary got suspicious and ordered the bus to be turned around. On reaching the compound, a search on Mr Sharma was conducted and a sum of Rs. 10,870 was recovered from him. During questioning, Mr Sharma was unable to provide any satisfactory answer on how he got the sum. A case was recorded in the General Diary that was kept at BPCL compound.

When the diary was examined again, a conflicting entry was recorded in the diary on how the sum recovered from Mr Sharma was loaned to him by a fellow officer. During the enquiry, it was found that the entry was a false one and was only entered in General Diary at the behest of the accused who had coerced ASI Surjan Singh who was in charge of the diary.

Following the incident, an FIR was registered by the authorities with the Anti-Corruption Bureau of the CBI and the accused was placed under suspension by official order.

Details of the Charge Sheet

The Appellant was charged as follows:-

Findings of the Investigation

During the departmental inquiry, the whole story came to the fore. The authorities examined numerous witnesses from both the parties. Head constable KK Sharma told the authorities that the loan theory that was floated by the accused was entirely false and that he didn’t have the money to provide the loan in the first palace and that he was pressured by the accused to make a false statement.

Another fact that was revealed during the inquiry was that a Constable, Mr Ram Avtar Sharma had received the sum on behalf;f of the accused from Mr Dk PArmar who was a contractor with the BPCL. It was found that the accused used to accept bribes from various contractors and used to take a cut from the proceeds of illegal sale of iron scrap. An amount ranging from Rs.5- 20 was also collected from all the trucks that used to enter the compound.

The Disciplinary authority after going through all the evidence concluded that Mr Sharma was guilty of falsifying records, and was taking bribes regularly. It also concluded that he had coerced witnesses to prove his case.

The disciplinary committee passed an exemplary order and dismissed the accused from the service.

The accused decided to challenge the order in front of the Appellate Authority. The appellate authority was of the opinion that as per evidence the accused was guilty, and the punishment that was imposed on him was not excessive at all.

Writ before the High Court

Aggrieved by order of the Appellate Authority, the accused filed a writ petition in the High Court of Bombay. The first that he put forth was that the punishment was excessive and he also raised a contention that there was a “non­compliance with Rule 34(10)(ii)(b) of CISF Rules, 1969 which specified serving of a second show cause notice and opportunity of hearing regarding the proposed penalty”.

The court examined all the material on record and facts of the case again and came to the conclusion that the accused took money from the BPCL contractors in the form of bribes and the court also refuted the accused’s claims that the set procedure was not followed. On 05.05.2009, the court dismissed the appeal.

The Appeal before the Supreme Court

Contention of the Appellant:-

Contention of the Respondents:-

Final Verdict of the Supreme Court

The Hon’ble Supreme Court based its verdict on the following points.

Countering the appellant’s point that CBI filed no charge sheet after inquiry, the court referred to the CBI report dated 07.03.2000, which stated that major disciplinary action should be initiated against the appellant.

3. Punishment and plea of leniency

The court opined that specific laws were made to punish those who indulged in Corruption and not using those laws against corrupted people amounts to injustice. It has also been held that considering the nature of the crime, there should be no leniency accorded to the appellant.

The court dismissed this appeal as, it had no merits.