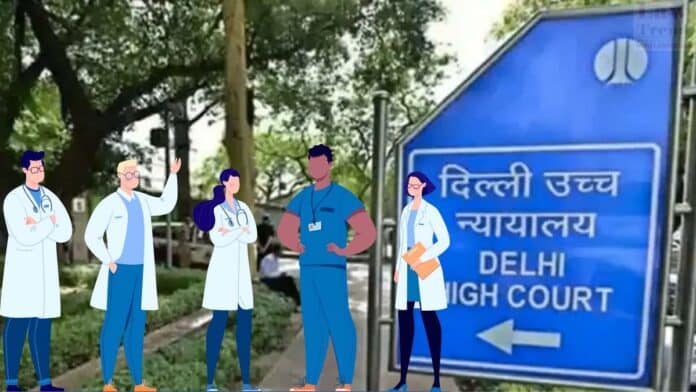 Further the Court directed the Delhi Metro to explore the possibility of setting up the ACLS services at all major inter-change Metro stations.

The bench of Justices Manmohan and Manmeet Pritam Singh Arora directed the Government of NCT of Delhi to ensure that the ACLS service is installed in the Delhi High Court premises before the next date of hearing.

In this case, Mr. Gautam Narayan, Counsel for the Delhi High Court handed over a status report on behalf of the Registrar General of the Delhi High Court. The report shows whether the BCLS/ACLS facilities are available in different court complexes of New Delhi.

High Court also directed the Government of NCT of Delhi to explore the possibility of either stationing ACLS ambulances at each and every District Courts or to allow erection of porta cabins for the provision of ACLS services in the District Courts.

The bench stated that “The Delhi High Court Medical Committee, as well as the Health Department of the Government of NCT of Delhi in consultation with the respective District Judges, are directed to ensure that the entire staff in the District Courts is regularly sensitized about cardiopulmonary resuscitation (CPR) guidelines of compression-only life support (‘COLS’) for management of the victim with cardiopulmonary arrest and also about the use of Automated External Defibrillator (‘AED’).”

High Court directed the Delhi Metro to explore the possibility of setting-up of the ACLS services at all major inter-change Metro stations within six weeks.

Case Title: Court on its own Motion v. Union of India & Ors.

Employees Deemed To Be Suspended Due To Criminal Charges Are Not Entitled To Back Wages If They Are Acquitted Unless The Suspension Is Unjustified:HC