Sec 313 CrPC Confers Valuable Right Upon Accused to Establish his Innocence Which is Protected Under Article 21: Supreme Court 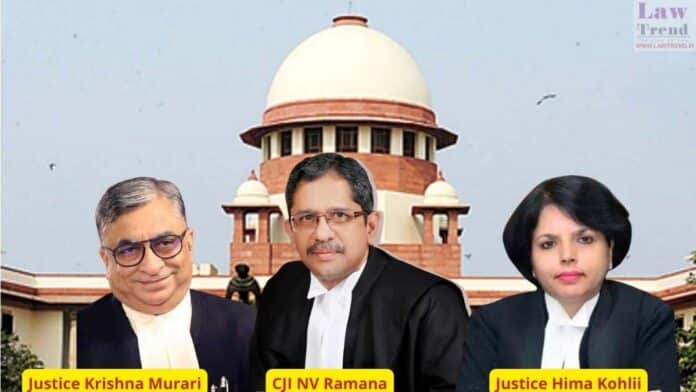 Supreme Court on Thursday stated that It is the duty of the Court to separate the grain from the chaff and to extract the truth from the mass of evidence. The case of the prosecution is based on mere conjectures and surmises.

The bench of CJI. N. V. Ramana and Justices Krishna Murari and Hima Kohli stated that even related witness statements need to be scrutinized more carefully.

In this case, the prosecution charged the appellant and co-accused under Section 307/34 IPC and Sections 25(1B) (a) and Section 27(1) of the Arms Act.

The trial Court convicted and sentenced the appellant as specified above while acquitting the co-accused, as the prosecution had failed to prove the charges against him.

By way of the impugned order, the Madhya Pradesh High Court confirmed the appellant’s conviction and sentence.

Counsel for the appellant submitted that the prosecution witnesses to both the incident as well as the alleged recovery of the firearm have turned hostile.

Whether the order passed by the Madhya Pradesh HC was in accordance with the law or not?

The bench stated that the alternate version put forth by the appellant-accused could not be ignored. Section 313 CrPC confers a valuable right upon an accused to establish his innocence and can well be considered beyond a statutory right, as a constitutional right to a fair trial under Article 21 of the Constitution.

Supreme Court opined that “the courts below failed to scrutinize the defence version put forward by the appellant in his Section 313 statement. The object of Section 313 of the Code is to establish a direct dialogue between the court and the accused. The purpose of Section 313 CrPC is to provide the accused a reasonable opportunity to explain the adverse circumstances which have emerged against him during the course of trial. A reasonable opportunity entails putting all the adverse evidence in the form of questions so as to give an opportunity to the accused to articulate his defence and give his explanation.”

In view of the above, Supreme Court allowed the appeal.