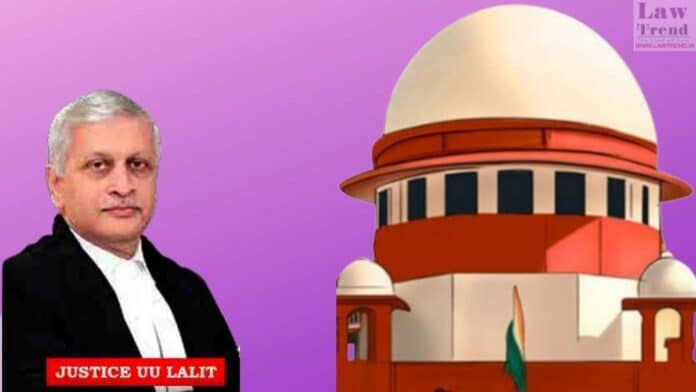 CJI Ramana will step down on August 26th. Kiren Rijiju, Union Minister of Law and Justice, recently wrote to the CJI, requesting that he name the successor.

If confirmed, Justice Lalit will be the second CJI to be directly elevated from the Bar to the Supreme Court Bench, following Justice S M Sikri, who became the 13th CJI in January 1971.

Justice Lalit, who is from Maharashtra, will serve as the 49th Chief Justice of India for a little less than three months, retiring on November 8, 2022. Justice Lalit was a Senior Advocate at the Supreme Court before being appointed as a judge on August 13, 2014. His father, Justice UR Lalit, was a senior advocate and a Delhi High Court judge.

Justice Lalit was among the majority of the Constitution Bench judges who ruled that Triple Talaq was unconstitutional. He also presided over the bench that ordered the Travancore Royal Family to hand over administration of the Sree Padmanabhaswamy Temple to a Court-appointed administrative committee. Last year, a bench led by him overturned the Bombay High Court’s contentious “skin-to-skin” decision, ruling that any physical contact with a minor with sexual intent is an offence under POCSO even if there is no direct contact with skin.

Justice Lalit, who was born on November 9, 1957, became an advocate in June 1983 and practised in the Bombay High Court until December 1985. In January 1986, he relocated his practise to Delhi.

From 1986 to 1992, he worked for former Attorney-General Soli J. Sorabjee. The Supreme Court designated him as a senior advocate in April 2004.