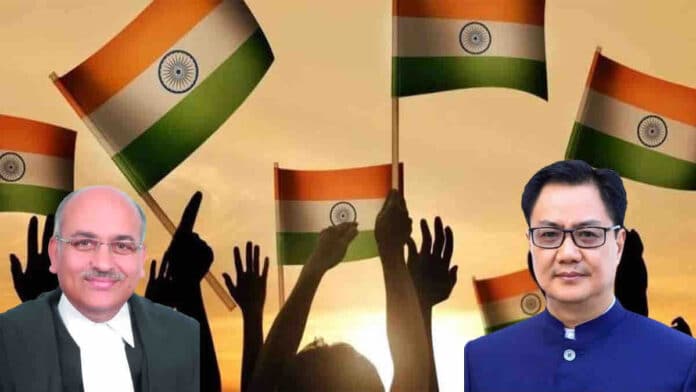 Recently, the Union Law Minister Kiren Rijiju wrote to J&K and Ladakh High Court Chief Justice Pankaj Mithal requesting him to encourage judiciary, staff of High Court, District Courts and subordinate courts to hoist the National Flag in their homes from August 13 to 15.

“As you are kindly aware Azadi Ka Amrit Mahotsav (AKAM)’ is an ongoing celebration in a campaign mode to commemorate the 75 glorious years of progressive independent India. The Indian National Flag is a symbol of national pride for the entire Nation.

To further honour our Flag, National Implementation Committee which oversees all efforts under AKAM has approved the programme of Har Ghar Tiranga to encourage every Indian citizen to hoist the National Flag at their home. Idea behind the campaign is to instil the feeling of patriotism in the hearts of people and reminisce thr contribution of those who tirelessly work for nation building. It is envisaged that all citizens will be encouraged to hoist the Tiranga in their homes during / the period from 13th – 15th August, 2022.

I am sure that in this National Campaign active participation by the judiciary as upholders of the Constitutional values will surely have a very encouraging impact on the general public and help in making this campaign a grand success.

I would therefore request your support and leadership in encouraging the judiciary and officials/staff of your High Court and District and Subordinate Courts in the State to hoist the National Flag in their homes during the period from 13th – 15th August, 2022 and making this Har Ghar Tiranga campaign of the Government a huge success.”