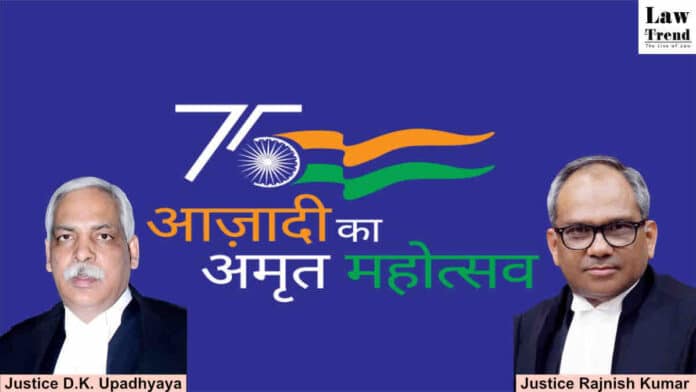 The Allahabad HC permitted the Gram Panchayats to hoist the National Flag during 11th to 17th August 2022 while celebrating “Azadi Ka Amrit Mahotsav”.

The bench of Justices Devendra Kumar Upadhyaya and Rajnish Kumar stated that the State Government should also be conscious of two Central Legislations, namely, The Prevention of Insults to National Honour Act, 1971 and The Emblems and Names (Prevention of Improper Use) Act, 1950.

In this case, the Government of India in the Ministry of Home Affairs has issued certain directions for organizing “Har Ghar Tiranga” programme during “Azadi Ka Amrit Mahotsav” and accordingly the Chief Secretary, State of U.P. has issued certain directions in this regard by means of Circular/Order dated 01.06.2022 giving instructions for hoisting the National Flag during “Azadi Ka Amrit Mahotsav”.

Counsel for the petitioner submitted that Village Panchayats are permitted to hoist the National Flag only on two days in a year, namely, ‘Independence Day i.e., 15th August and ‘Republic Day i.e. 26th January’.

However in the meantime the High Court permitted the Gram Panchayats to hoist the National Flag during 11th to 17th August 2022 while celebrating “Azadi Ka Amrit Mahotsav” in terms of the instructions and guidelines issued by the Chief Secretary, Government of U.P. which are embodied in the Circular/ Order dated 01.06.2022.

Share
Facebook
WhatsApp
Twitter
Print
Pinterest
Previous articleSec 313 CrPC Confers Valuable Right Upon Accused to Establish his Innocence Which is Protected Under Article 21: Supreme Court
Next articleOffence Under SC-ST Act Should be Investigated by a Police Officer Not Below the Rank of DSP- Allahabad HC Sets Aside Conviction