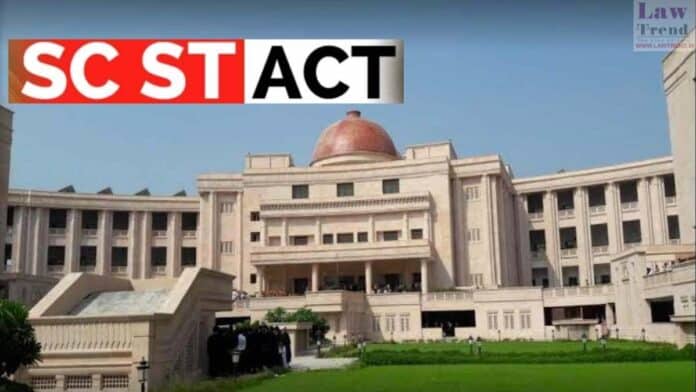 The Allahabad HC on Friday ruled that offence under SC-ST Act should be investigated by a police officer, not below the rank of DSP.

The bench of Justices Ramesh Sinha and Ajai Kumar Srivastava opined that the mere fact that the first informant, and the injured persons, belonged to the scheduled caste community, per se, does not constitute an offence under Sections 3(i)(x) and 3(2)(v) S.C./S.T. Act.

In this case, the appellant was convicted and sentenced to undergo life imprisonment with a fine of Rs.5,000/- for the offence under Sections 302/34 of the Indian Penal Code and Sections 3(i)(x) of Scheduled Castes and Scheduled Tribes (Prevention of Atrocities) Act.

Shri Shiv Shankar Singh, Counsel for the appellants submitted that the learned trial court has recorded the finding of guilt of the appellants against the weight of evidence which is not sustainable.

Counsel for the respondent submitted that the impugned judgment and order is based on proper analysis and appreciation of prosecution evidence. It is a reasoned and well-discussed judgment wherein no interference in the exercise of power under Section 386 Cr.P.C. by this Court is warranted.

The High Court stated that it is trite law that suspicion, howsoever grave, cannot take place of legal proof.

According to the bench, there is no caste-based insult and intimidation by the appellants given with the intent to humiliate the first informant and injured persons in any place within public view. Therefore, the mere fact that the first informant, and the injured persons, belonged to the scheduled caste community, per se, does not constitute an offence under Sections 3(i)(x) and 3(2)(v) S.C./S.T. Act

High Court noted that “in terms of Rule 7 of the Scheduled Castes and the Scheduled Tribes (Prevention of Atrocities) Rules, 1995, the offence committed under the S.C./S.T. Act shall be investigated by a police officer not below the rank of a Deputy Superintendent of Police. However, the instant case has been investigated by S.I. Sher Bahadur Singh who is not an officer of the rank of Deputy Superintendent of Police as required by Rule 7 of S.C./S.T. Rules. Due to this reason also, the investigation of this case, insofar as, the same relates to offences under Sections 3(i)(x) and 3(2)(v) S.C./S.T. Act is vitiated.”

In view of the above, High Court partly allowed the appeal.