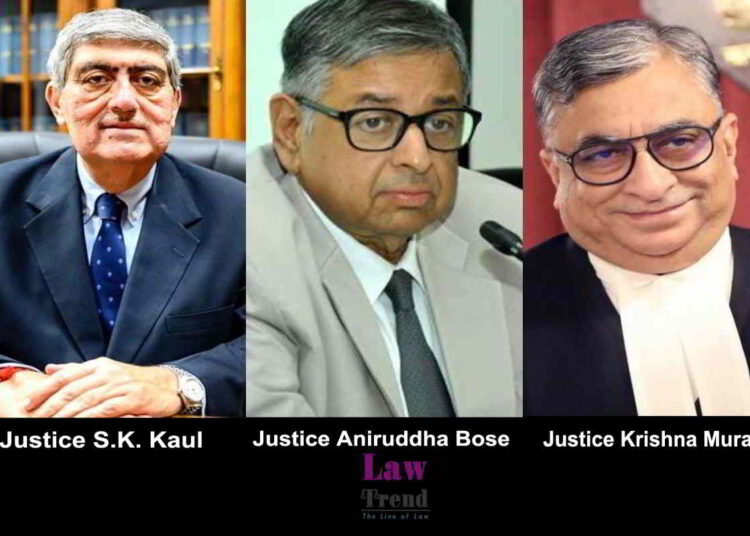 The Supreme Court in its latest Judgment has allowed the Criminal Appeals of two persons who were convicted under Section 302 IPC. Supreme Court has held that conviction cannot be based upon the testimony of an unreliable witness.

The appellants were convicted under Section 302 IPC r/w Section 34 IPC and were sentenced to life imprisonment.

On SI Joginder Singh received 03.08.1990 information, SI Gian Singh Constable Jai Singh and Constable Narender Pal reached the spot of the crime near Sukhdev market. There they were informed that the injured person had been moved to AIIMS, Delhi.

As per their statement, their brother was attacked near Sukhdev Market by Amar Singh, Shiv Charan, who were giving hockey stick blows and one Inder Singh who was stabbing their brother with a knife. They tried to help their brother, but the attackers told them that they would be murdered as well if they tried to save him. Later on, the attackers fled, and the bod was brought to the hospital by a PCR van.

Inspector Richpal Singh conducted an investigation, and the accused were arrested. Police recovered the hockey sticks that were allegedly used for the attack and through Inder Singh a Knife was recovered. Samples of blood and samples of blood-stained earth were also collected from the spot.

The Sessions Court heard the case. The prosecution examined Twenty-seven witnesses, and the statements of the accused were recorded under Section 313 CrPc. The accused denied the case of the prosecution.

Sessions Court found them guilty, and the accused were convicted for murder punishable under Section 302 IPC r/w Section 34 IPC. The accused were sentenced to life imprisonment.

Aggrieved by order of the Sessions Court, the accused filed an appeal in the High Court.

Before the High Court, the Counsel for the accused stated that there was an unexplained delay in lodging the FIR and also in despatching a copy of the same to the jurisdictional magistrate.

It was also stated that two witnesses, PW 11 and PW 5 did not support the case of the prosecution and the whole case was based on the testimony of Parminder Sing(brother of the deceased). It was also alleged that the version of events stated by Parminder Singh was doubtful. The Counsel further argued that the accused Inderjeet Singh was falsely implicated in the case.

However, the High Court held that the order passed by the Sessions Court was sound and dismissed the Appeal.

Aggrieved by order of the High Court, the accused moved the Supreme Court.

Arguments raised on behalf of the appellants.

Learned Counsel for the appellants submitted that the entire incident appears to be inherently improbable. He further submitted that two witnesses in the case have turned hostile and the case was based solely on the testimony of PW1 Parminder Singh.

The Counsel further argued that it is very doubtful that Parminder Singh was there at the spot of crime and his conduct was inconsistent and unnatural. He urged the Court not to pass an order based on the statement of one witness.

Contentions of the Respondent-State

Learned Counsel stated that the order passed by the trial court and the High Court was correct. Testimony of the sole eyewitness was reliable and should be considered. She further argued that the testimony of the hostile witness should not be discarded as a whole and relevant parts of the statement are admissible evidence.

It was also stated that the medical evidence corroborate the testimony of the  eyewitness.

Supreme Court went over the testimony of the two hostile witnesses and observed that they gave an inconsistent version of events. Further, during the cross, they turned hostile and said that as it was dark due to which they were not able to see the accused. Therefore their testimony cannot be relied upon.

Hon’ble Supreme Court agreed that conviction could be based on the sole testimony of only one eye witness so long he is found to be wholly reliable.

The Supreme Court doubted the version of the witness because during cross he changed his statement and said the whole incident lasted only 5 mins. In contrast, earlier he said it lasted substantially longer. The statement of the witness that the PCR van arrived without informing also created doubt in the mind of the Court.

Hon’ble Judges of the Supreme Court also observed that even though the assailants were only armed with hockey sticks and a knife, the brothers who were present on the spot did not try to save their brother. It was also noticed that the brothers did not seek aid from the clinic of Doctor Bhardwaj, which was nearby but waited for the PCR van.

Based on all the facts mentioned above, the Court found the testimony of the witness cannot be relied upon.

Decision of the Supreme Court

Title:- Amar Singh Versus The State (NCT of Delhi)