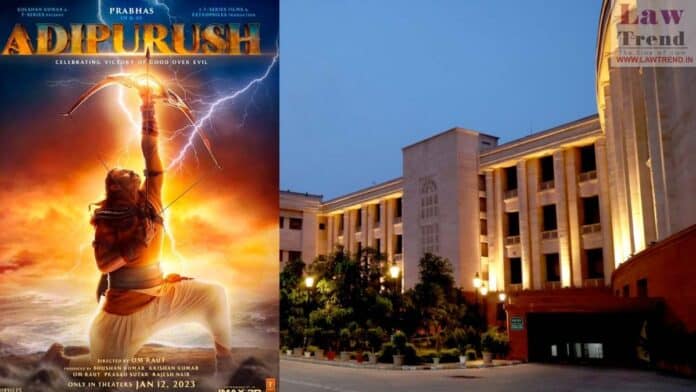 A PIL has been filed before the Allahabad High Court atLucknow, seeking a stay on the release of the film Adipurush.

The Petition filed through Advocates Ranjana Agnihotri, Sudha Sharma, states that the teaser or promo of the film is so atrocious, wicked, and diabolical that it, along with the subsequent movie, which is scheduled to be released on 12 January 2023, should be outright banned in its current form in the interest of Hindu religious feelings, sentiments, and aspirations.

Today the bench of Justices Ramesh Sinha and Renu Agarwal heard the case and ordered it to be listed after two weeks.

Adv Ashwani Kumar Singh represented the Union of India in this matter.

It also claims that the Board of File Certification is obligated to protect the rights of Ramayan, Lord Rama, Lord Hanuman, and Maa Sita devotees and to ensure that the film does not offend the public in any way.

The plea alleges that the film Adipush was not granted a certificate by the board under Section 5A/5B of the Act of 1952, but a teaser was released on the occasion of Gandhi Jayanti on October 2, 2022. The film will also be released on January 12, 2023.

According to the petition, the film is based on the great epic Ramayan, which was written by Maharishi Valmiki, who was a contemporary of MahaRaja Dusharath. The petition claims that the decision in the trailer is the result of the producer/perverse director’s imagination, and thus maliciously contradictory and highly derogatory.

The petition also requests that the state authorities take appropriate action against the film’s producer, director, and actors.

Kuldeep Tiwari and Others v. Union of India and Others

Petitioner :- Kuldeep Tiwari And Another

Respondent :- Union Of India Thru. Secy. Ministry Of Information And Broadcasting And 13 Others

Caste is Not Carried Forward With Conversion of Religion: Madras High Court