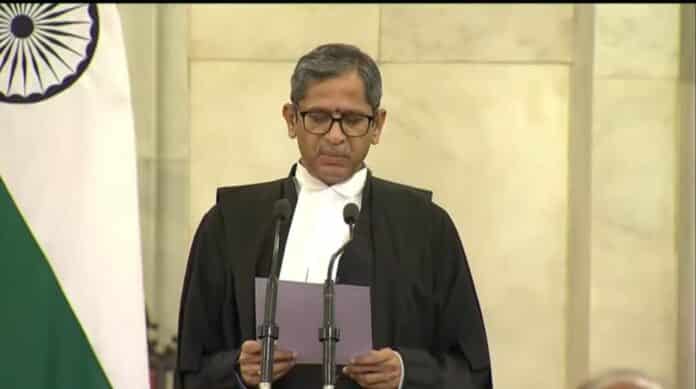 Hon’ble Justice NV Ramana has been sworn in as the new Chief Justice of the Country. He will be the 48th CJI.

The oath-taking ceremony of Justice Ramana took place at 11 AM at Rashtrapati Bhavan on Saturday. President Ram Nath Kovind administered the oath.

Justice Ramana is the first judge from Andhra Pradesh High Court to become the CJI.

His parents were agriculturists, and he was born on 27.08.1957. During his student days, Justice Ramana took a keen interest in issues of farmers and industrial workers and was known for his activism.

Justice Ramana began his career as a journalist, worked in a leading Telugu newspaper, and later began his legal career.

He enrolled as a lawyer on 10.02.1983 and used to practice before the High Court, Supreme Court, and Central and State Administrative Tribunal. He has also served as the Addl.Standing Counsel for Railways in CAT, Hyderabad and has also worked as Additional Advocate General of Andhra Pradesh.

During his tenure as a SC judge that lasted more than seven years, Justice Ramana authored 156 judgements.