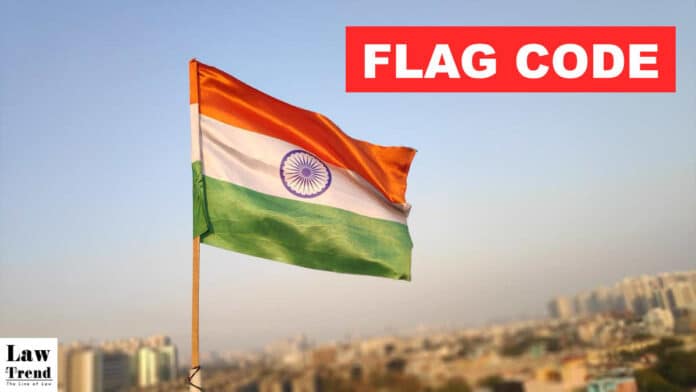 Recently, the Ministry of Home Affairs  changed the country’s flag law to facilitate the inauguration of the ‘Har Ghar Tiranga’ Campaign from August 13 to 15 as part of the ‘Azadi Ka Amrit Mahotsav,’ which will commemorate the country’s 75th anniversary of independence.

What is the Flag Code of India?

The Flag Code of India 2002 is a set of regulations and practices that govern how the Indian National Flag is used, displayed, and hoisted in the country.

It was enforced on January 26, 2002, replacing the provisions of The Emblems and Names (Prevention of Improper Use) Act, 1950, and The Prevention of Insults to National Honour Act, 1971, which covered actions involving the national flag prior to that date.

What exactly does the Flag Code say?

According to the Flag Code of India, 2002, a member of the public, private organization, or educational institute is permitted to fly the national flag on all days and events, ceremonial or otherwise, commensurate with the flag’s dignity and honor.

The code is broken into three sections. The first section provides an overview of the national flag. The second section discusses flag display by members of the public, private organizations, and other institutions. The third section discusses the display of the national flag by the federal and state governments, as well as their organizations/agencies.

Prior to the introduction of the 2002 code, the display of the national flag was governed by provisions of the Emblems and Names (Prevention of Improper Use) Act of 1950 and the Prevention of Insults to National Honour Act of 1971.

What Recent Changes have been made to the code?

The Centre revised the Flag Code of India on July 20, 2022, allowing the national flag to be flown both during the day and at night if it is displayed in the open or on the property of a member of the public. Previously, the tricolor could only be flown between sunrise and sunset.

The government previously permitted the use of machine-made and polyester flags in an amendment dated December 30, 2021. Previously, such flags were not permitted.

Here are some pointers:

(x1) “where the Flag is displayed in open or displayed on the house of a member of public, it may be flown day and night;”

What Exactly Is the ‘Har Ghar Tiranga’ Campaign?

Prime Minister Narendra Modi launched the “Har Ghar Tiranga” campaign on July 20, 2022, to convince people to carry the Tiranga home and hoist it to honor India’s 75th anniversary of independence. The initiative’s purpose is to instill patriotism in the people and have them observe Azadi Ka Amrit Mahotsav in honor of Jan Bhagidari.

Numerous events involving people from all walks of life will also be staged at various Freedom Struggle sites to demonstrate the nation’s unity and patriotism.

The Indian government has made a number of steps to ensure that flags are available throughout the country. All Post Offices in the country must begin selling flags on August 1, 2022. State governments have also collaborated with a variety of partners to provide and sell flags. The Indian National Flag has also been registered on the GeM platform.

According to the PIB, the Indian government has engaged with a number of e-commerce platforms and self-help organizations to expedite the process of distributing the Flag.

Share
Facebook
WhatsApp
Twitter
Print
Pinterest
Previous articleShe Now has Courage to Face the Society- Madras HC Grants Probation to Woman Convicted For Attempt to Suicide and Killing Two Daughters by Poison
Next articleIt Would Be Improper To Sustain A Conviction Only On a Confession: Delhi HC Releases Accused Convicted under PC Act