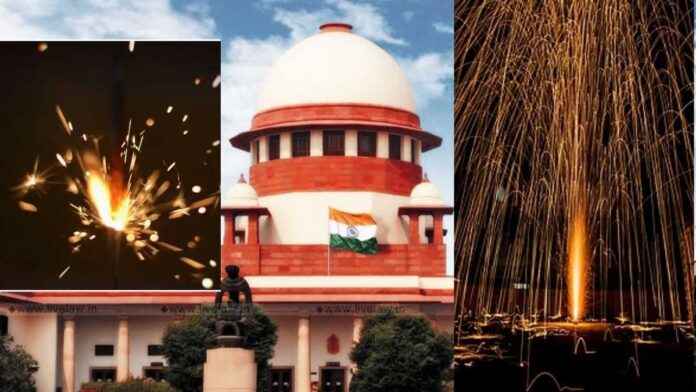 The Supreme Court on Thursday dispelled the perception about the ban on firecrackers and said that it is not against any particular group or community.

The Supreme court said it cannot allow violation of rights of citizens under the garb of celebration.

A bench of Justices MR Shah and AS Bopanna made it clear that it wanted full implementation of its orders.

“You (producers) cannot play with the lives of citizens under the guise of celebration. We are not against any particular community”, the bench said.

The top court said the first order banning firecrackers was passed citing detailed reasons. Not all firecrackers were banned. This was in the wider public interest.

It should not be inferred that it was banned for a particular purpose. Last time we said that we are not coming in the way of enjoyment but we cannot come in the way of fundamental rights of the people.

Everyone knows what the people of Delhi are suffering from: Supreme Court

The top court said that some responsibility should be assigned to the authorities so that the order can be implemented.

The bench said that even today firecrackers are freely available in the market. We want to send the message that we are here to protect the rights of the people. We have not imposed 100% ban on firecrackers. Everyone knows what the people of Delhi are suffering from.

In the guise of employment, the right to life cannot be allowed to be violated.

Earlier, the apex court had ordered the six producers to show cause as to why they should not be penalized for contempt of their orders.