Doors of the Court should Remain Open Even if there is Pandemic in the Country: Allahabad HC 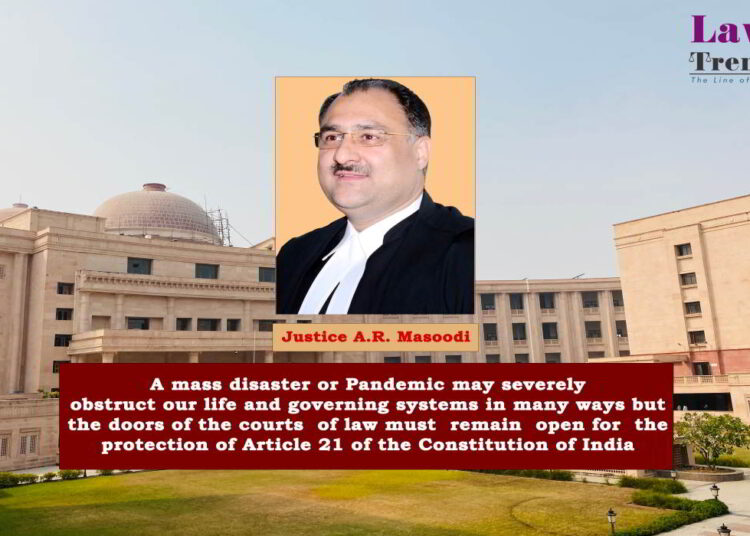 620
SHARES
1.8k
VIEWS
Share on FacebookShare on TwitterShare via WhatsappShare via EmailPinterest

On Wednesday, the Allahabad High Court observed that non-performance of duties due to holidays was a severe dereliction on the part of the Magistrates/ Judges while adjudicating a case of bail.

It was observed that a pandemic or mass disaster might severely obstruct our life, but the doors of the Court should always remain open.

Why did the Court make the afore-mentioned statements?

Two bail applications were filed before the Court where issues were identical. In both, the applications, the right enshrined under Article 21 was pressed on the ground of default by the prosecution to file the charge sheet as mentioned u/s 167(2) Cr. Pc.

Learned counsel of the applicant argued that right of default bail was an indefeasible right and the same could not be denied once limitation for filing police report ran out.

It was further argued that even if prayer for release was not made out, the Magistrate should have secured the release of the applicants.

The Court cannot make the excuse that the Courts were closed due to the pandemic to legitimise the custody of applicants, submitted the counsel.

Learned AGA, on the other hand, argued that in Sanjeev Yadav’s cases, the report was ready before the deadline but could not be submitted due to closure of Courts.

Whereas in the case of Abhishek Srivastav, in the District Judge’s report, it was stated that there was no remand from 25/03/2020 to 16/6/2020 due to closure of Courts due to lockdown.

The issue before the Court:

The main issue before the Court was whether the right to liberty, as mentioned in article 21, would be eclipsed due to the lockdown enforced by the government.

The Court observed that the District Judges were duty-bound to assign remand duty to Magistrates/ Courts during the lockdown period and the accused-applicant should have been offered default bail u./s 167(2) of CrPc.

Reliance was placed on Uday Mohanlal Acharya vs State of Maharashtra where it was held that once the application of default bail was filed, the mere filing of the police report will not frustrate the right of default bail.

The Court further observed that it was unfortunate that legal services were not taken as essential services during the lockdown, but the Courts and the States were duty-bound to grant default bail in cases where it was due.

In the case of Abhishek Srivastav, the Court held that a case of default bail was made out, and the applicant should be released on bail.

In the case of Sanjeev Yadav, the Court held that the right to default bail became enforceable on 29.04.2020 and was alive even when the charge sheet was filed; therefore the applicant should be enlarged on bail as well.