No Right of Appointment as High Court Judge In Article 217 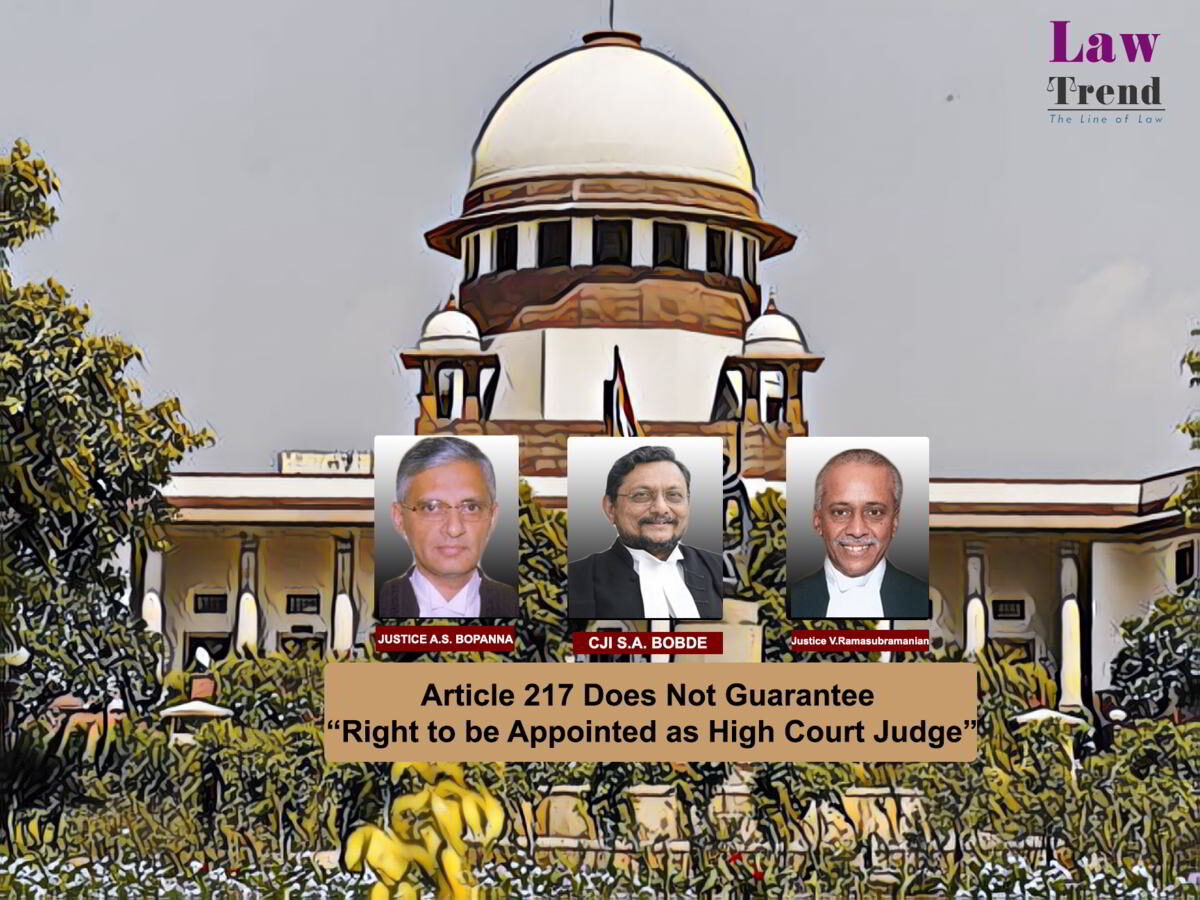 Today a Bench of Chief Justice S.A. Bobde, Justice A.S. Bopanna and Justice V.Ramasubramanian, delivered Judgment in the case of R.Poornima and Others vs Union of India and Others (Writ Petition Civil No. 1172 of 2019), answering an interesting question as to the counting of experience of a District Judge as an Advocate for the purpose of Elevation to the High Court.

The Petition was filed by persons who were appointed as District Judges (Entry Level) by way of Direct Recruitment seeking following reliefs:

(c) Pass such further or other Order or Orders that this Hon’ble Court may deem fit and proper in the facts and circumstances of the case.”

At the time of admission of the Petition, the Petitioners deleted Prayer No.1and confined to the relief sought at serial no. 2., after which the notices were issued by the Court.

The Petitioners as well as the Respondent Nos. 24 to 29 were duly selected and appointed as District Judges (Entry Level) by way of direct recruitment. Therefore, obviously, they had not completed 10 years of service as Judicial Officers, as on date. But at the time of their appointment as District Judges, the Petitioners had practiced for more than 8 years as Advocate.

The short grievance of the petitioners was that despite being the senior most in the cadre of District Judges, they have been overlooked and their juniors now recommended for elevation to the High Court as Judges.

This, according to the Petitioners, was done by the Collegium of the High Court solely on the application of Explanation (a) under Article 217(2) of the Constitution of India. The contention of the Petitioners is that to determine the eligibility of a person, subclauses (a) and (b) of clause (2) of Article 217 together with Explanations (a) and (aa) should be applied simultaneously.

In simple terms, the Petitioners wanted the experience gained by them as advocates to be clubbed together with the service rendered by them as Judicial Officers, for determining their eligibility.

Once this clubbing is allowed, the Petitioners would like to take advantage of their settled seniority position in the cadre of District Judges, over and above that of Respondent Nos. 5 to 23. In other words, the Petitioners wanted the best of both worlds.

When vacancies arose for elevation to the High Court as Judges, as against the 1/3rd quota meant to be filled up from among the State Judicial Officers, the Collegium of the High Court found that the Petitioners had not completed 10 years of service in a Judicial Office as required by Article 217(2)(a). Therefore,

the Collegium recommended the names of persons who fulfilled the eligibility criteria. Aggrieved by this action on the part of the Collegium of the High Court, the Petitioners challenged it before the Supreme Court.

Contention of the Petitioners: