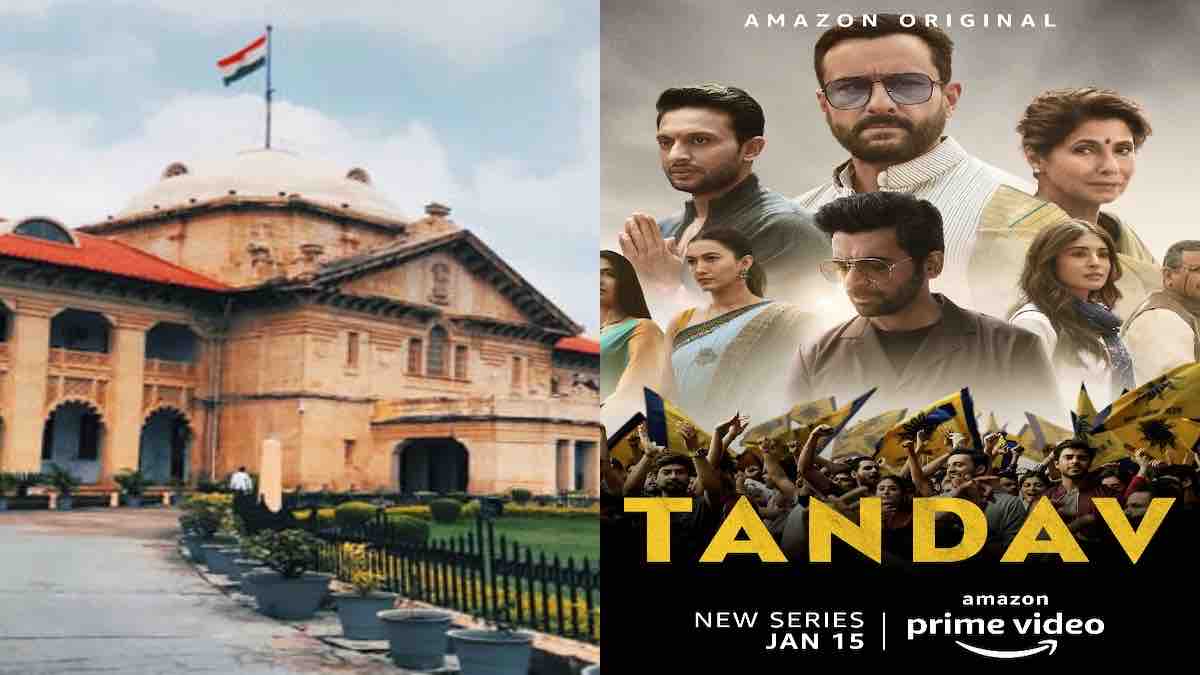 The FIR says that:

A  web series is being shown on Amazon Prime Video, which is an online movie OTT platform and on 16.01.2021, the movie part-1, “TANDAV” has been broadcasted. The web series is being shown through Amazon Prime Video through Head of India Originals, as paid movie. The movie has been directed by co-accused, Ali Abbas. The content of this movie is affecting the image of the police of State of Uttar Pradesh adversely. In a Dial 100 police vehicle, two actors are shown travelling with open doors in a police uniform, consuming liquour and hurling abuses. The shooting has taken place in District- Gautam Buddh Nagar. After witnessing part-1 of the movie, it is seen that the Hindu Gods and Goddesses have been depicted in a bad light with the intention of inciting communal sentiments. The post of Prime Minister has been depicted in a manner which will adversely affect the democratic system of the country. Caste and community related utterances have been made deliberately so that it may affect the public peace. Similarly, utterances have been made against the State police, public administration and the constitutional posts so that the element of hate is developed between the communities and there are scenes which show disrespect for the scheduled castes. On account of the scenes and dialogues in the movie, the social harmony and public peace is being adversely affected. All this has been deliberately done to make the web series controversial and gain publicity for the purpose of commercial gain.

The Counsel for the Applicant submitted that the cast and crew of the web series “TANDAV” issued an unconditional apology (without prejudice to any of their rights or without any admission of any kind of wrong doing) on 18.01.2021 and have removed the offensive scenes and now there is no offensive material in the series.

The AGA appearing on behalf of the State opposed the Bail Application and stated that this is not the only FIR in connection with the web series and in fact 10 FIR and 4 Complaints have been lodged so far, which shows that merely one person is not affected by the conduct of the applicant and other co-accused persons, rather number of persons across the country have felt that the web series is offensive and hence, they have lodged F.I.Rs/complaints. It is not a stray case of some over-sensitive individual lodging the F.I.R against the applicant and other coaccused persons regarding objectionable character and content of the web series in dispute. Hence, the applicant is not required to be granted any latitude from this Court.

Hon’ble Justice Siddharth of Allahabad High Court has given the verdict in this case. Hon’ble Judge firstly referred to the disputed contents of the Tandav Web Series. The Court observed:

The submission of apology or withdrawal of scene after its streaming would not absolve the accused persons of the offence committed by them. The alluding to Lord Rama gaining popularity on social media is clear pointer to the dispute regarding the construction of Lord Ram’s temple. The dialogue between the two Hindu Gods in episode 1 is shown in a very insidious manner. Devakinandan is abusing the man of lower caste working as a cobbler. Comment has been made regarding grant of reservation to scheduled castes.

Respect for all religions was the intention of the framers of the Constitution of India and hence, every citizen has been granted liberty to practice, profess and propagate his/her religion as per Article 25 of the Constitution of India. However, it is fundamental duty of every citizen under Article 51A(e) to promote harmony and spread common brotherhood amongst all the people of India, transcending religious, linguistic and regional or sectional diversities and to renounce practice derogatory to the dignity of woman. The scenes referred to above show that the woman of higher caste has been shown in a derogatory manner affecting the dignity of the woman since she has been made a symbol of revenge of a man of lower caste for taking revenge against the atrocities done against the woman of lower castes from long time.

The reference to the disclaimer cannot be considered to be a ground for absolving the applicant of permitting the streaming of an objectionable movie online. The use of the word “TANDAV” as the name of the movie can be offensive to the majority of the people of this country since this word is associated with a particular act assigned to Lord Shiva who is considered to be creator, conservator and destroyer of the mankind all together.

This Court further takes notice of the fact that number of movies have been produced which have used the name of Hindu Gods and Goddesses and shown them in disrespectful manner (Ram Teri Ganga Maili, Satyam Shivam Sundram, P.K., Oh My God, etc.). Not only this, efforts have been made to subvert the image of historical and mythological personalities (Padmavati). Names and icons of faith of majority community have been used to earn money (Goliyon Ki Rasleela Ram Leela). This tendency on the part of the hindi film industry is growing and if not curbed in time, it may have disastrous consequences for the Indian social, religious and communal order. There appears to be a design behind such acts on the part of the people who just give a disclaimer in all the films and depict things in the movies which are really religiously, socially and communally offensive in nature. The young generation of the country, which is not much aware of the social and cultural heritage of this country, gradually starts believing what is shown in the movies by the people like the accused persons in the present movie in dispute and thereby, it destroys the basic concept of the survival of this country having tremendous diversity of all kinds as a united nation. Film industry in south has not indulged in such acts like the hindi film industry.

Considering above the court dismissed the application.

Opposite Party :- State of U.P.