[Editorial] Ambedkar Was Not in Favour of “Collegium System”, Said Dominance of CJI in Judges’ Appointment is Dangerous 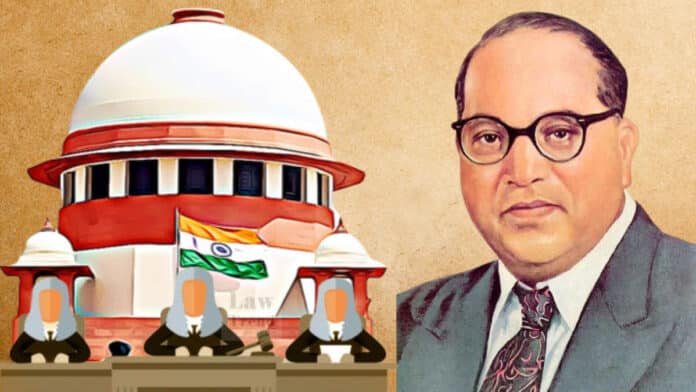 The Indian judicial appointment system has encountered difficulties. The collegium system has recently come under fire from the executive, led by Union law minister Kiren Rijiju, while the judiciary, led by Chief Justice of India (CJI) DY Chandrachud, has defended it.

The Narendra Modi government recently returned 25 names recommended by the top court collegium for appointment as high court judges across the country.

According to Article 124(2) of the Constitution, “Every Judge of the Supreme Court shall be appointed by the President by warrant under his hand and seal after consultation with such of the Judges of the Supreme Court and of the High Courts in the States as the President may deem necessary for the purpose and shall hold office until he attains the age of sixty five years: Provided that in the case of appointment of a Judge other than the chief Justice, the chief Justice of India shall always be consulted”

As per Article 217(1) of the Constitution, “Every Judge of a High Court shall be appointed by the President by warrant under his hand and seal after consultation with the Chief Justice of India, the Governor of the State, and, in the case of appointment of a Judge other than the chief Justice, the chief Justice of the High court, and shall hold office, in the case of an additional or acting Judge, as provided in Article 224, and in any other case, until he attains the age of sixty two years.”

There was little debate about the appointment process in the early years of our republic. However, between 1970 and 1980, questions about the independence of our judiciary began to be raised, particularly in light of the regular tussle between the central government and the Supreme Court, and the flash point came in 1980 on the issue of transfer of judges from one high court to another, when the Supreme Court in S. P. Gupta vs Union of India (known as the First Judges case) recognised the president’s primacy and also held that the word “consultation” in Article 124 does not mean concurrence.

The collegium system completely changed the situation. In Supreme Court Advocates on Record Association vs Union of India (Second Judges Case), a nine-judge bench of the Supreme Court revisited the constitutional scheme of judicial appointment and overruled the majority view in the First Judges Case, giving primacy to the President in the appointment of Judges to superior courts.

According to the 1993 judgement, the collegium’s final recommendation is binding on the Government of India. The Supreme Court reasoned that selection of judges is an ‘integrated-participatory-consultative process., therefore it must be initiated by the collegium in order to maintain the judiciary’s independence and separation from the executive.

The Court ruled that the President cannot govern appointments to the higher judiciary with the assistance and advice of the Union Council of Ministers, which is led by the Prime Minister.

The Third Judges Case of 1998 [In re Special Reference 1 of 1998] is an opinion delivered by the Supreme Court of India in July 1998 in response to a question of law regarding the collegium system raised by then President of India K. R. Narayanan under his constitutional powers.

The Supreme Court ruled that NJAC is interfering with the independence of the judiciary by the executive, which amounts to tampering with the basic structure of the constitution, which parliament is not authorised to change.

However, the Supreme Court acknowledged that the collegium system of judges appointing judges lacks transparency and credibility, which the Judiciary would rectify/improve.

On the 23rd and 24th of May 1949, the Constituent Assembly of India, which enacted and adopted the Constitution, debated the current Article 124 (then Article 103 of the draft Constitution).

It is therefore suggested that article 193 (1) may be worded in the following or other suitable manner.

“It is of the highest importance that the Judges of the Supreme Court should not be made to feel that their existence or their appointment is dependent upon political considerations or on the will of the political party. Therefore, it is essential that there should be sufficient safeguards against political influence being brought to bear on such appointments. …….. That the Judges should be above all these political considerations cannot be denied. Therefore, I submit that one of the chief conditions mentioned in the procedure laid down, that is the concurrence of the Chief Justice of India in the appointment of the Judges of the Supreme Court, must be fulfilled.

I submit, Sir, that it is of the highest importance that the President must not only consult the Chief Justice of India, but his concurrence should be obtained before his colleagues, that is the Judges of the Supreme Court, are appointed.”

What Did Dr. Ambedkar Said on Supremacy of CJI in Process of Appointment of Judges?

Now, Sir, with regard to the numerous amendments that have been moved, to this article, there are really three issues that have been raised. The first is, how are the Judges of the Supreme Court to be appointed? Now grouping the different amendments which are related to this particular matter, I find three different proposals. The first proposal is that the Judges of the Supreme Court should be appointed with the concurrence of the Chief Justice. That is one view. The other view is that the appointments made by the President should be subject to the confirmation of two-thirds vote by Parliament; and the third suggestion is that they should be appointed in consultation with the Council of States.

“There can be no difference of opinion in the House that our judiciary must both be independent of the executive and must also be competent in itself. And the question is how these two objects could be secured. There are two different ways in this matter is governed in other countries. In Great Britain the appointments are made by the Crown, without any kind of limitation whatsoever, which means by the executive of the day. There is the opposite system in the United States where, for instance, officers of the Supreme Court as well as other offices of the State shall be made only with the concurrence of the Senate in the United States.

It seems to me in the circumstances in which we live today, where the sense of responsibility has not grown to the same extent to which we find it in the United State, it would be dangerous to leave the appointments to be made by the President, without any kind of reservation or limitation, that is to say, merely on the advice of the executive of the day.

Similarly, it seems to me that to make every appointment which the executive wishes to make subject to the concurrence of the Legislature is also not a very suitable provision. Apart from its being cumbrous, it also involves the possibility of the appointment being influenced by political pressure and political considerations.

The draft article, therefore, steers a middle course. It does not make the President the supreme and the absolute authority in the matter of making appointments. It does not also import the influence of the Legislature. The provision in the article is that there should be consultation of persons who are ex hypothesi, well qualified to give proper advice in matters of this sort, and my judgment is that this sort of provision may be regarded as sufficient for the moment.”

Dominance of the Chief Justice in Appointment of Judges is Dangerous Position: Dr Ambedkar

It is not difficult to restore relations between the judiciary and the executive if both parties are willing to address each other’s concerns. However If the current trend continues, it is not difficult to imagine a situation in which a major verdict that may go against the Government is portrayed by the political leadership as the result of the judiciary’s hostility rather than one based on merits.

One option is for the judiciary to initiate or agree to a process of reforms in the way the Collegium operates or to modify the composition and culture of NJAC, which earlier non suited to the Supreme Court.