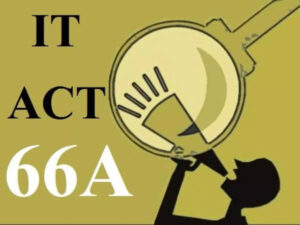 On 08.07.2020, while entertaining the Petition, the Allahabad High Court was amazed of the fact that despite Section 66-A of IT Act 2000 has been declared ultra vires by the Supreme Court, yet F.I.R’s being lodged in Uttar Pradesh under the said provision.

Further, the court noted that taking cognizance of the said illegality,
the Supreme Court in the case of Peoples’ Union For Civil Liberties vs. Union of India and Others, [Case Detail- Writ Petition Criminal No.
199/2013], directed the Union Government to supply the copies of the Judgment to Chief Secretaries of all States and Chief Secretaries were supposed to sensitize the Police Department.

The Court also observed that Prima Facie action of the authorities is complete disregard to the Judgment of
the Supreme Court in the case of Shreya Singhal Vs. Union of India, (2015) 5 SCC 1, therefore “We are back to square one”.

The Court restrained itself from summoning the police official, amidst the pandemic

Pursuant to the aforesaid order Shri Rajiv Kumar, Inspector P.S.-Pilua, Etah, to whom the investigation of the case was assigned,
appeared before the Court and submitted on affidavit that except the offence punishable under Section 66A of IT Act, the Petitioner cannot be charged for any other offence.

In view of the above and relying upon the Judgment of the Supreme Court in the case of Shreya Singhal Vs. Union of India, (2015) 5 SCC 1, in which Section 66A of the I.T. Act has been declined ultra vires, the Allahabad High Court quashed the F.I.R.