Allahabad HC Directs State Govt to Strictly Implement the Provision for Grant of Rs. 25000 as Compensation for Illegal Detention By State Authorities 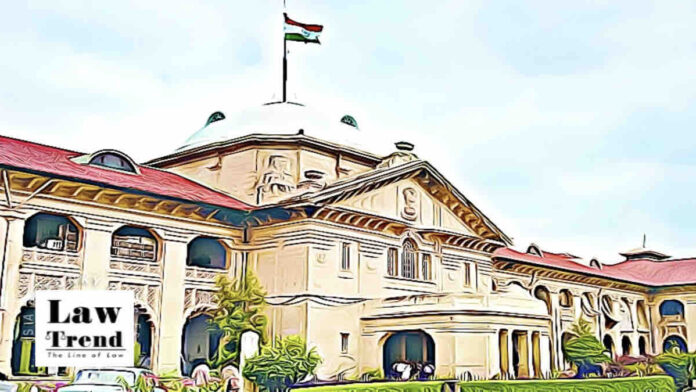 The Allahabad High Court on Friday delivered a significant Judgment on the issue of the personal liberty of citizens. The Court has directed the State Government to strictly implement the provision of grant of compensation to a citizen, who has been illegally detained and also take disciplinary action against erring officials.

There was some dispute relating to ancestral property between the petitioners and their family members, regarding partition of ancestral land, which led to tiff between them.

Consequently, in apprehension of breach of public peace, the police arrested the petitioners under Section 151 Cr.P.C. 2 on 08.10.2020. A Challani Report dated 08.10.2020 was submitted by the Sub Inspector, Police Station Rohania, District Varanasi to the Sub Divisional Magistrate, District Varanasi under Section 151/107/116 Cr.P.C., which was in printed form and merely name of the petitioners and others, name of village and “land dispute” have been filled by ink in the aforesaid Challani Report.

On receipt of the Challani Report, the Sub Divisional Magistrate registered the case and directed to detain the Petitioner till submission of bond.

On 12.10.2020 the petitioners submitted personal bond and other papers but allegedly, the respondent no.3 did not release him and instead, under the pretext of verification, directed the file to be placed on 21.10.2020.

The State Government submitted that corrective measures have been taken by issuance of circulars dated 30th January, 2021 and 31st January, 2021 providing that challan of action taken u/s 107, 116, 116(3) and 151 CrpC should not be on a printed proforma and detailed facts should be mentioned in the order.

It stands admitted that the police authorities are arbitrarily and illegally submitting Challani Reports under Sections 107/116 Cr.P.C. Since the State has taken steps to correct the mistakes and illegalities, therefore, we do not propose to issue any further direction in that regard, except that the afore-quoted Circulars dated 30th January, 2021 and 31st January, 2021 shall be strictly implemented in the whole of the State of Uttar Pradesh.

An ordinary citizen or a common man is hardly equipped to match the might of the State or its instrumentalities. The servants of the government are also the servants of the people and the use of their power must always be subordinate to their duty of service. A public functionary if he acts maliciously or oppressively and the exercise of power results in harassment and agony then it is not an exercise of power but its abuse. No law provides protection against it. He who is responsible for it must suffer it.

But when it arises due to arbitrary or capricious behaviour then it loses its individual character and assumes social significance. Harassment of a common man by public authorities is socially abhorring and legally impermissible. It may harm him personally but the injury to society is far more grievous. Nothing is more damaging than the feeling of helplessness. An ordinary citizen instead of complaining and fighting succumbs to the pressure of undesirable functioning in offices instead of standing against it. Therefore, the award of compensation for harassment by public authorities not only compensates the individual, satisfies him personally but helps in curing social evil.

Where it is found that exercise of discretion was mala fide and the complainant is entitled to compensation for mental and physical harassment then the officer can no more claim to be under protective cover. The test of permissive form of grant is over. It is now imperative and implicit in the exercise of power that it should be for the sake of society. It is the tax payers’ money which is paid for inaction of those who are entrusted under the Act to discharge their duties in accordance with law.

The Court recorded its appreciation for the State Government to take the policy decision dated 23.03.2021 for payment of compensation of Rs.25,000/- for illegal detention of any citizen by any Officer of the State Government and initiation of disciplinary proceedings against such officer.

Since the State Government itself has taken a policy decision and has paid compensation to the petitioners herein, therefore, the court said that no further direction for payment of compensation is required to be issued in the present writ petition.

In view of the aforesaid, this writ petition has been disposed of with the following directions: