Acquittal In Criminal Case Does Not Mean Automatic Reinstatement: SC 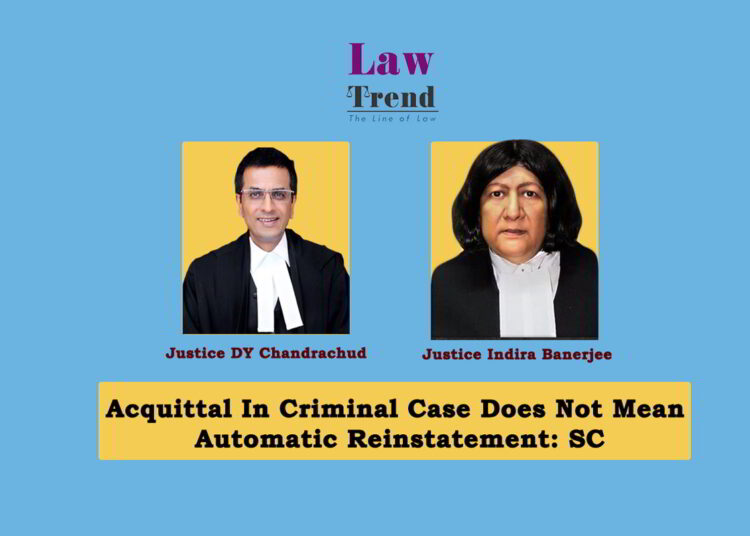 589
SHARES
1.7k
VIEWS
Share on FacebookShare on TwitterShare via WhatsappShare via EmailPinterest

While pronouncing their judgement in an appeal, the Supreme Court held that a dismissal order could be passed even if an official is acquitted of criminal charges.

The respondent had joined the Rajasthan Police service as a constable in the year 1992.

Even though a trial was already going on against him, disciplinary proceedings were also instituted against him.

He was acquitted in the murder trial, but the disciplinary committee held that charges against him had been established and he was dismissed from service.

He filed an appeal before a Single Judge Bench of Rajasthan High Court which was dismissed.

However, a Division Bench overruled the order of the Single Judge Bench and directed the respondent to reinstate him back in service.

Acquittal In Criminal Case Does Not Mean Automatic Reinstatement

Supreme Court held that direct evidence to sustain a charge of conspiracy was difficult to come by
even in the criminal trial so if the defendant was acquitted was a different scenario.

It was observed that the main issue in the appeal was the fact that his name had come up in a murder case
and if it would affect his reputation and integrity while serving in the Police Force.

A reference was made to Southern Railway Officers vs Union of India where it was held that a dismissal order could be passed against a delinquent officer even if he was acquitted in a criminal charge.

The Court also relied on the Inspector of General of Police vs S. Samuthiram where it was held that ‘unless a defendant has been ‘honourably acquitted’ in a criminal case, the decision of a disciplinary proceeding
will not be affected and will not lead to automatic reinstatement.

It was observed that in the instant case, a number of witnesses had turned hostile and even the star witness had changed his statement so as per the set precedents such circumstance will not conclude a disciplinary proceeding.

Referring to the disciplinary proceeding, the Court remarked that there had been enough material to conclude that the discharge of the defendant was not honourable.

The Court agreed with the contention of the respondent state if the employee was reinstated then it might erode the public confidence in the police force.

The appeal of the respondent state was allowed. But the Supreme Court exercised its power under Article 142 and directed that cessation from services will be deemed to take place from the date of completion of minimum qualifying period of service.

Title:State of Rajasthan vs Heem Singh