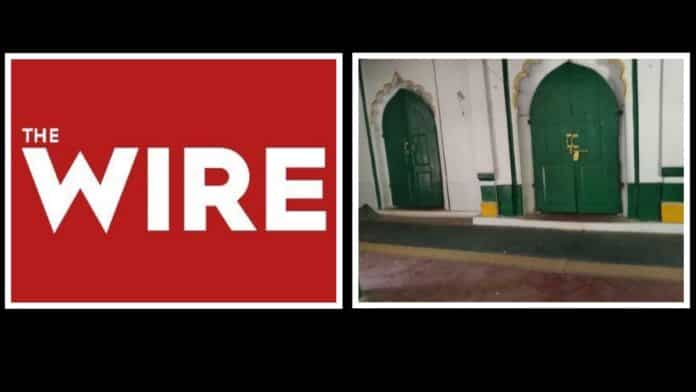 The UP Police has registered an FIR against the news portal, The Wire and two journalists associated with it for their report on the alleged Gareeb Nawaz Mosque illegal demolition issue in Barabanki, UP.

The accused are journalist Mukul Chauhan and Seraj Ali about a video report regarding the alleged illegal demolition of a mosque. The Fir also names the Secretary of Mosque Committee (Mohammad Anees) and a resident (Mohammad Naeem) who spoke to The Wire about the issue.

The district administration of Barabanki had demolished the said Masjid earlier this month by stating that it was an illegal structure. This news was widely reported in the media.

As per the FIR, the journalist intentionally spread hatred in society and disturbed the areas’ communal harmony by uploading a video on Twitter relating to the legal demolition of an illegal building.

There is no mention of the mosque in the FIR but calls it an illegal building that is legally demolished. It is said that baseless allegations were made in the video like the police/administration through religious books of a particular religious community which was incorrect.

Founding editor of The Wire, Mr Siddharth Varadarajan, has called the charges baseless. He further stated that this is the fourth FIR that UP police have filed against them in the last fourteen months.

The All Indian Muslim Personal Law Board (AIMPLB) and the Sunni Waqf Board have field filed petitions before the Allahabad High Court against the recent demolition of Gareeb Nawaz Mosque in Barabanki, UP. A contempt petition has already been before the High Court against SDM of Ram Snehi Ghat, Barabnaki and other officials for demolition of the mosque. Hon’ble High Court has already stayed the arrest of the Masjid’s Committee Members accusing them of forging Mosque documents.