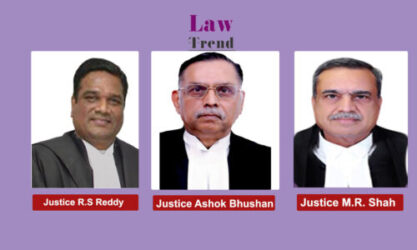 On 17th September 2020 a three-Judges Bench of the Supreme Court, comprising Justice Ashok Bhushan, Justice R. Subash Reddy, and Justice M.R. Shah passed their Judgement in the case of Trustees of H.C Dhanda Trust vs State Of Madhya Pradesh and Ors. The case deals with the imposition of penalty on stamp duty.

Mr H.C Dhandha was a Minister in the government of Maharaja Holkar of Indore. He received 108,900 sq ft of land as a gift by the order number 58 on 22.04.1946, and a hotel named hotel Lantern was constructed on it. He also received a parcel of land from his Father in law, and that land was situated at 5, Rabindra Nath Trilok Marg, Indore.

Shortly before his demise, he executed his will on 26.10.2006. He mentioned all his movable and immovable properties in the will, and through the will, he also created a trust. Mr Dhandha Placed the above to properties in the trust and appointed his son, Mr Yogesh Dhandha as Chairman of the Trust. He also appointed C. A B.J Dave and Mr Chaggan Lal as the members of the trust and were also executors of his will.

After the passing of Mr H.C Dhandha, the Board of Trustees held a meeting and as per a resolution, Hotel Lantern and Jahaj Mahal properties were transferred from H. C Dhandha Trust to Mr Jogesh Dhandha and a few others. A Deed of Assent was drawn, and the trustees gave their consent to transfer both the properties.

However, the Collector of Stamps, Indore issued a notice where it was stated that proper stamp duty was not paid on the Deed of Assent dated 21.05.2005. During hearing the Collector held that the Deed of Assent was a gift deed, and as per the provisions of the Indian Stamp Act, 1889, stamp duty payable was 8 percent of the market value, 1 percent Municipal Duty and a Janpad Duty of 1 per cent. The Collector calculated the penalty amount to be to the tune of Rs 1,28,09,700. He also imposed a ten times penalty, and the total amount was calculated to be Rs. 12,80,97,000.

The petitioners filed an appeal before the Board of Revenue, Madhyapradesh where the Board upheld the order of the Collector.

Petitioners then approached the Supreme Court to seek liberty to file an appeal in the High Court. The High Court held that the appeals were not maintainable.

Aggrieved by the order, the petitioners filed an Appeal In the Hon’ble Supreme Court.

Arguments before the Supreme Court

The counsel for the appellants argued that the deed in question was not a gift deed. He also stated that no reason was provided by the Collector, Board of Revenue and the High Court for the imposition of the excessive fine of ten times the penalty. As per, the counsel of the appellant, the fine imposed by the authorities was illegal and that the Deed of Assent was executed with bonafide intention.

The counsel appearing for the opposite part, Mr Tushar Mehta stated that the nature of the document was rightly determined as a gift deed and the imposition of ten times penalty was also justified as the appellant tried to evade the stamp duty.

Question Before the Court

Hon’ble Judges, after going through the arguments were of the view that the question that needs to be answered in this case was whether the imposition of the penalty was indeed justified.

Rationale Behind the Decision of the Court

The Court reasoned that the purpose of penalty, in general, should be deterrence and should not be construed as retribution.

Hon’ble Supreme court also looked into Section 40 of the Indian Stamp Act,1899 where it was stated that the penalty imposed cannot exceed ten times of the duty and also mentions that it is at the discretion of the authority.

After going through the provisions of the stamp act and case laws, the Supreme Court opined that imposition of ten times the penalty amount should be imposed only in extreme cases. The Court also noted that the Collector as well as the High Court has observed that ‘there was an intention on the part of appellants to evade stamp duty’, but in view of the Supreme Court an extreme penalty was unwarranted in this case.

The Court, in its decision, upheld the order dated 22.09.2018 of Collector of Stamps but modified the penalty amount to just five times instead of ten.