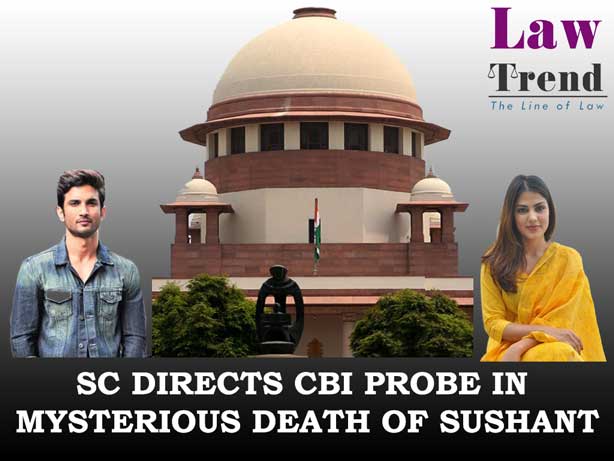 616
SHARES
1.8k
VIEWS
Share on FacebookShare on TwitterShare via WhatsappShare via EmailPinterest

On 19.08.2020 (Wednesday), the Supreme Court has delivered its Judgment in the case of a probe by CBI in the mysterious death of actor Sushant Singh Rajput.

For the first time, a Single Judge of Supreme Court has exercised power under Article 142 of Constitution [Read Here].

though Bihar police had jurisdiction to lodge FIR concerning mysterious death Sushant Singh Rajput on the Complaint of his father,

it could not investigate it. For Maharastra Government also, the Court directed to transfer the files to CBI for investigation.

The Order came to be passed on the plea of actress Rhea Chakraborty’s seeking transfer of the FIR from Patna (Bihar) to Mumbai (Maharastra).

It has been alleged int he FIR that Ms Chakraborty abetted suicide of Sushant Singh Rajput.

In view of the settled position of law, there is no doubt that the Pata Police has legally registered the Complaint of the father of Sushant.

So, the Court observed that Rajput was a talented actor in the Fil Industry, and before he could realise his full potential, he left the world.

It has been held that a fair, impartial and competent investigation in the matter is the need of the hour.

The outcome of the investigation and trial be a measure of Justice for the family of Rajput.

to do complete Justice in the matter, the investigation is being handed over to the CBI.

a Single Judge of the Supreme Court cannot exercise power under Article 142 of Constitution.

It has been held that the power under Article 142 is conferred upon the Supreme Court of India, not to a particular bench or Judge.