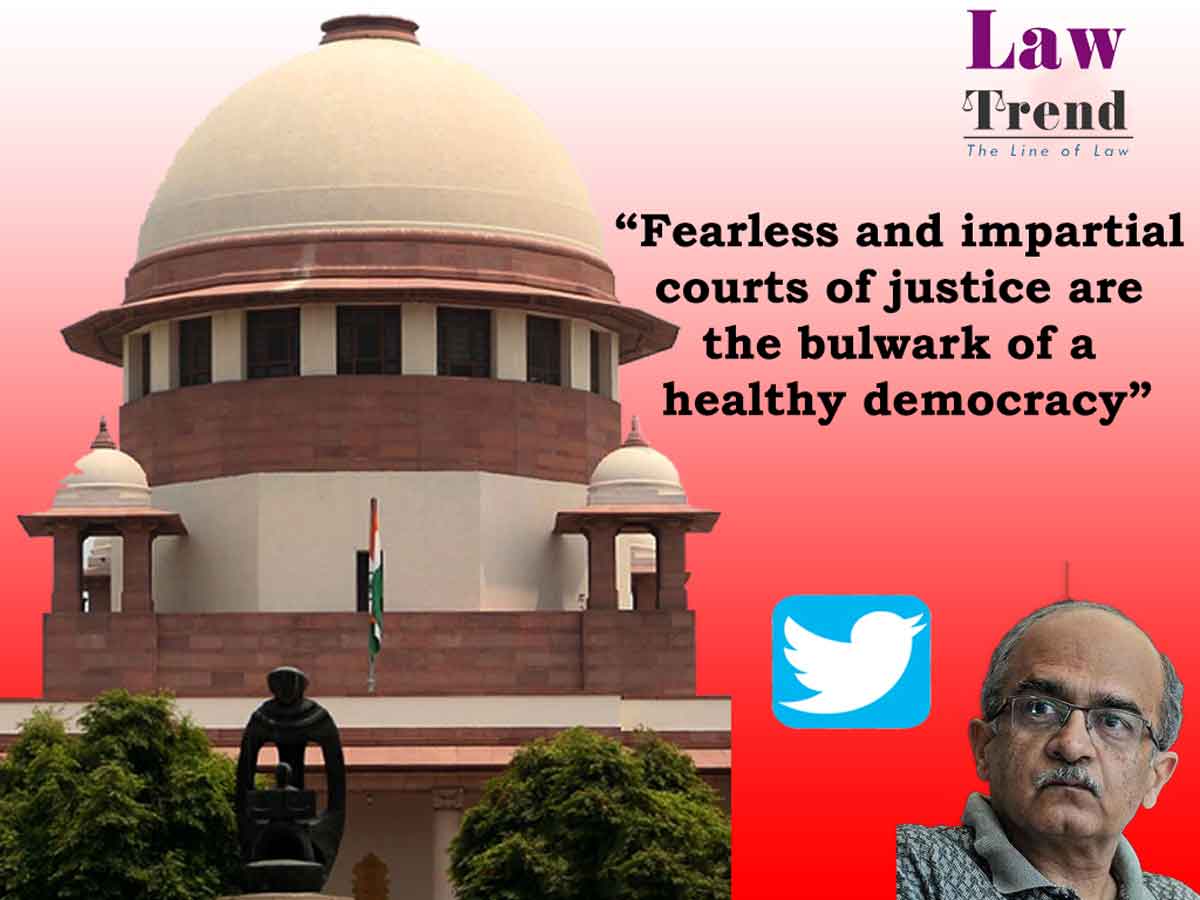 delivered a crucial judgment in the case of INRE: Prashant Bhusan and Another…..Alleged Contemnor(s),

holding that Mr. Prashan Bhushan (Advocate) is guilty of committing criminal contempt of the Supreme Court of India.

Supreme Court has fixed 20th August 2020 for hearing on the issue of quantum of sentence.

Maximum Punishment for Contempt of Court:

person may be punished for contempt of court with simple imprisonment upto six months, or with fine upto two thousand rupees, or with both:

Provided that on offering apology to the satisfaction of court, the accused may be discharged or the punishment awarded may be remitted.

How the matter reached to the Supreme Court:

Mr. Prashant Bhushan, Advocate, has published a tweet on his twitter handle which amounts to hate/scandalous speech against this Court

and entire judicial system. After examining the request on the Administrative side,

the Supreme Court directed the matter to be placed on the Judicial side to pass appropriate orders.

After that, the petition was placed before Supreme Court on 22.7.2020.

On the said date, the Supreme Court found that the tweet in question made against the CJI, by Prashant Bhushan,

Supreme Court at large and the office of CJI in particular, in the eyes of public at large.

Considering above the Court tok Suo motu cognizance of the tweet and issued notice to Attorney General of India and Mr Prashant Bhushan.

The main contention of Mr. Bhushan was, that the first tweet was made primarily to show his anguish at the non-functioning of the Supreme Court for the last more than three months, due to whichfundamental rights of citizens facing serious and urgent grievances were not being addressed or taken up for redressal.

It was submitted, that proceeding under contempt proceedings against him stifle free speech and would constitute an unreasonable restriction under Article l9(1)(a) of the Constitution.

-First part of the tweet was his considered opinion, that democracy has been substantially destroyed in India during the last six years.

-Second part was that the SC has played a substantial role in allowing the destruction of the democracy; and

-Third part was with respect to the role of the last 4 Chief Justices in particular in allowing it.

Twitter Inc. in their affidavit-in-reply filed on its behalf stated that under section 79 of the Information Technology Act, 2000 it has been provided protection as an intermediary for any objectional posts on its platform posted by its users. It was lastly submitted, that to show its bonafides, taking cognizance of the impugned tweets, twitter blocked the said tweets and disabled them.

The Supreme Court held that Judiciary is the Guardian of the Rule of Law and Central Pillar of democratic setup. The purpose of conferring power of contempt is maintain the sanctity of the court

The Court held that the tweets of Mr. Bhushan amounted to Criminal Contempt of the Court. However considering the bonafides and role of twitter, notices were discharged against them.