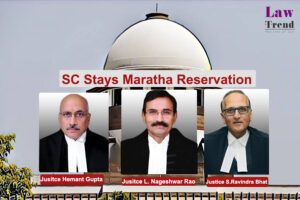 On 9th September 2020, Three Judges Bench of the Supreme Court, Justices Hemant Gupta, L. Nageshwar Rao and S Ravindra Bhat passed an order in Dr Jaishri Laxmanrao Patil Vs. The Chief Minister and others. The case deals with the highly controversial issue of providing reservations to Maratha people of Maharashtra. Before we delve into the details of the case, let’s take a quick look at the background of the case.

Background of the Case

The present case arose when on 30.11.2018, The Maharashtra State Reservation for Socially and Educationally Backward Classes Act or the SEBC Act,2018 came into force. As per the provisions of the said Act, the Marathas were declared to be a Socially and Economically Backward Class and were therefore entitled to get 16 per cent reservation in all educational institutions of the state, and another 16 % reservation was accorded to them in all the appointments that took place through direct recruitments in the state of Maharashtra.

People from different strata of society considered the Act unfair and constitutionally invalid. Quite a few PILs were filed in the High Court of Bombay.

The Bombay HC upheld the validity of the Act however, it also made specific changes which they deemed fit. The reservation in the educational institutions was reduced to 12% from 16%, and when it came to public employment, the 16 per cent reservation was slashed to 13 per cent. As soon as this order was pronounced, the parties which deemed this order unfair approached the Supreme Court of India.

How the case Unfolded

The SC admitted the case and notices were issued to all the concerned parties and the matter as posted to 27.07.2020 for hearing. On the day of the hearing, the counsel for the state of Maharashtra informed the court that as per Government Resolution dated 04.05.20 there will be no fresh recruitment till 15.09.2020 in all the departments except in the Department of Medical Education and the Public Health Department.

After considering the arguments of the respondents, the court directed that the case will be taken up after four weeks, and on the date of hearing, two issues will be discussed, 1. The request to refer the matter to a larger bench and to hear all the I.As that were filed in the case.

Arguments of the applicants

Contentions of the respondents

Observations Of the Court

After going through the arguments that were made by all the parties, the court believed that the matter should be referred to the larger bench as there question of law that needs to be addressed. However, according to the judges, the court also has the power to grant temporary relief if they think ex-facie a statute is unconstitutional and needs to be referred to a larger bench.

Order Of the Court

Considering the importance of the case, the court has provided the liberty to all the parties to mention it for an early hearing if they want to. Now, it’s up to the Chief Justice Of the Country whether to refer it to a larger bench or not.