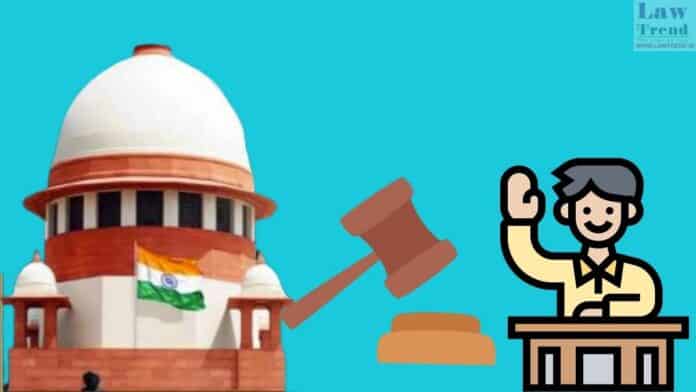 The Supreme Court on Thursday stated that there is no sufficient evidence which could prove that the appellant was present at the time of the murder.

The bench of Justices Ajay Rastogi and C.T. Ravikumar observed that there is no iota of evidence which, in any manner, connects the present appellant with the commission of a crime.

In this case, An FIR was lodged by the mother of the deceased that her son was burnt to death under suspicious circumstances inside his rented house.

The police filed a charge sheet under Sections 302/120B/ 201/118 IPC against three persons ie. the wife of the deceased, the mother, and the appellant.

The only allegation levelled against the appellant was that he had, in conspiracy with other accused persons, removed the evidence of offence from the place where the alleged crime had been committed.

The appellant has filed an appeal against the order of the Gauhati High Court rejecting the discharge application filed by the appellant under Section 227 Cr.P.C.

Counsel for the appellant submitted that Ld. trial Judge was at least required to examine the existence of prima facie material regarding the participation of the appellant in the commission of crime or existence of grave suspicion against him and when there is no prima facie material of suspicion what to say of grave suspicion, the charge cannot be framed.

Counsel for the respondent submitted that there is sufficient evidence against the appellant to suspect the commission of a crime and only after examining the charge sheet and other material available on record, the charges framed by the learned trial Judge.

Whether the Order of Gauhati High Court in rejecting the application filed by appellant for discharge was valid or not?

Supreme Court stated that the investigating officer has not brought even prima facie material in the charge sheet as to what was the motive on the part of the appellant to commit the alleged offence.

The bench stated that “there is no iota of evidence which, in any manner, connect the present appellant with the commission of a crime and neither the trial Court nor the High Court has even taken pains to look into the record as to whether there is any oral/documentary evidence which in any manner connect the appellant with the alleged incident of crime and, in the absence of even a prima facie material, oral/documentary, being placed by the prosecution in the charge sheet, the trial Court as well as the High Court have committed a serious error in framing charge against the appellant. Even the complainant also in the complaint has not named the appellant as the perpetrator of the offence, rather she stated that she suspects foul play.”

In view of the above, Supreme Court allowed the appeal.