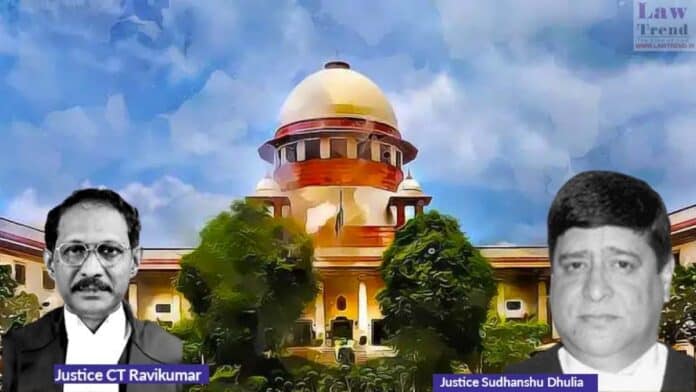 After observing that the instant case involves personal liberty and the court is expected to pass orders one way or the other after considering the merits of the case at the earliest, the Apex Court granted intgerim protection from arrest to the petitioner.

The Top Court further observed that posting of anticipatory bail after a couple of months can’t be appreciated.

These observations were made by the Bench of Justices CT Ravikumar and Sudhanshu Dhulia while hearing an SLP filed against a June 2 decision of the High Court.

As per the Apex Court, the petitioner’s grievance is that his application seeking anticipatory bail was posted to August 31 without granting any interim protection. The said anticipatory bail plea was moved on May 24 2022.

After noting the same, the bench asserted that as per them in a matter involving personal liberty, the courts are expected to pass orders one way or the other by considering the merits of the matter at the earliest.

The Bench also opined that posting of anticipatory bail application after a couple of months can’t be appreciated.

Therefore, the Supreme Court directed the High Court to take up the petitioner’s anticipatory bail plea and merits and decide the same expeditiously.

The court further added that in case the main application can’t be disposed of within stipulated time then the High Court should consuder the interim reliefs sought on its own merits.

The court disposed of the instant SLP but granted the petitioner interim protection from arrest.

Title: Sanjay versus NCT of Delhi & Another