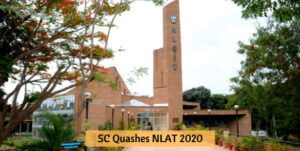 Today’s Latest Judgment is of the Supreme Court passed in a petition filed against National Law School of India University, Bangalore for conducting National Law Aptitude Test. The Judgment has been delivered by the bench of Justice Ashok Bhushan, Justice R. Subhash Reddy and Justice M.R Shah.

There were two petitioners in this case. The first petitioner was the father of a law aspirant, and the other was former vice-chancellor of National Law School of India University, Bengaluru.

The petitioners requested the Court to direct the respondent no.1, NLSIU, Bangalore, to not to conduct a separate exam for the admissions to their five year BA.LLB course. The petitioners stated that all the National Law Universities in the country take admissions solely based on the scores achieved in the Common Law Admission Test (CLAT).

In their petition, they stated that if NLSIU conducts a separate exam, then thousands of students who have been preparing for the CLAT exam for many years will face undue hardships as the format of the exam is different from that of CLAT exam.

Arguments raised by the Petitioners:-

Contentions of the Respondents

Questions before the Court:-

Five main questions were put before the Court:-

The reasoning of the Court:-

The Court held that even though the petitioner no.1 has not put any material on record to prove that he was affected by NLAT exam, the petition was maintainable because petitioner no.2 was the vice-chancellor of NLSIU at one point of time and has been closely associated with the development of legal studies in the country and the CLAT exam as well.

The Court opined that NLSIU was required by statute to take the recommendation of the Academic Council before conducting or notifying the NLAT exam. As per the Court, the notification of the exam was not issued as per the rules laid down in the National Law School of India Act, 1986

The Court rejected the plea of the respondent that the “Doctrine of Necessity” was applicable in this case as the Clat exam was delayed and if the NLAT were not conducted, then the students would have lost a year. The Court stated that the academic year could have been altered to accommodate the trimester format of NLSIU. As a member of the consortium, they should not have gone forward with a separate exam.

The Court opined that if a home-based examination was conducted for NLAT 2020.2021 then students. They don’t have the technological infrastructure to sit for the exam, which will be a violation of their rights as per Article 14.

After going through all the arguments raised by both the respondents and petitioners the Court passed the following judgement:-

The Court quashed the notification issued by NLSIU. The University was also directed to admit candidates based on their CLAT score. The directed the consortium of Universities which conduct the CLAT exam to complete the process of examination as early as possible so that the studies of students are not hampered. The Court also directed the respondents that the CLAT examination that is supposed to be held on 28.09.2020 should be conducted after taking all the precautions because of the COVID-19 pandemic.