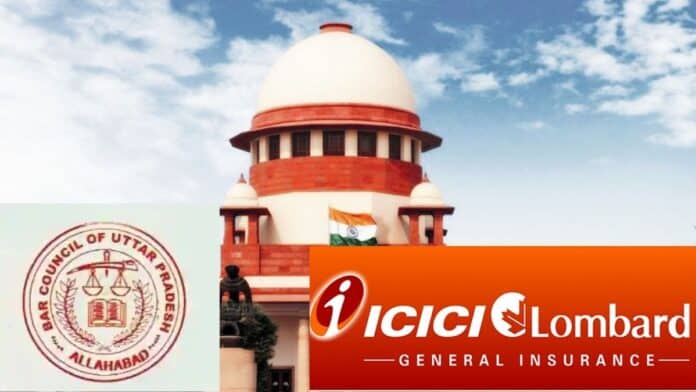 On October 5, Supreme Court expressed displeasure to the Bar Council of UP on how it failed to take action against lawyers who file fake petitions under the Motor Accident Claims Tribunal and the Workmen Compensation Act.

The Bench took note of the UP government’s supplementary affidavit wherein it said that an SIT was formed according to Allahabad HC’s order dated 07.10.2015.

In its affidavit, the State that ICICI General insurance has forwarded them cases of suspicious claims related to other insurance companies. This includes cases referred by the District Judge of Rae Bareli and other courts.

The Supreme Court noted that SIT has received 1376 complaints and out of which in 246 cases, claims have been processed. In these cases, there was a role of lawyers, police, and insurance agents and till now 83 criminal complaints have been registered.

As per the Court, the affidavit states that investigation in 33 cases has been completed and the charge sheet against the accused will be released soon.

The Court expressed displeasure at the manner and speed through which the investigations were carried out and remarked that it was the duty of UP Bar Council to take action against the erring lawyers who file such fake claims.

Therefore, the Supreme Court directed SIT and UP Government to forward it the name of lawyers against whom a prima facie case is made out. The Court said that the names should be sent to it in a sealed cover by 15.11.2021 and posted the case on November 16.