RERA | Can Complaint be Made Against Unregistered Projects? Allahabad HC to Consider 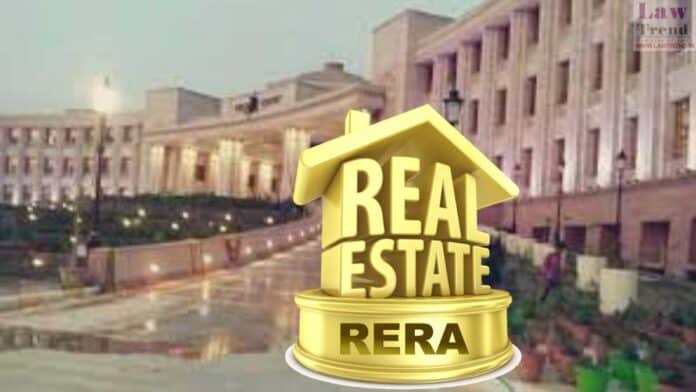 Allahabad HC on Friday admitted the appeal filed against the judgment and order of Tribunal RERA and framed 3 substantial questions of law.

The bench of Justice Abdul Moin was dealing with the case where the appellant booked an apartment with respondent promoter. As per the agreement entered into between the appellant and respondent, the possession of the apartment was to be given by December, 2015.

When the respondent failed to deliver the possession, the appellant was constrained to file a complaint before the authority in March, 2018, praying for refund of the amount paid by him.

The refund was claimed taking into consideration Section 18 of the Real Estate (Regulation & Development) Act, 2016, which provides for refund of amount and compensation. The authority vide the impugned order disposed of the complaint of the appellant by directing the respondent to give the physical possession of the apartment by a particular date and to pay the penalty as per the rules.

The Real Estate Appellate Tribunal rejected the Appeal filed against the order of RERA Authority, on the ground of maintainability of Complaint under section 31 and Appeal under section 44 of RERA ACT 2016 against the unregistered project.

Against the judgment and order of Tribunal, RERA APPEAL was filed before Hon’ble Allahabad High Court sitting at Lucknow, whereby the Hon’ble Court admitted the appeal and framed 3 substantial questions of law and stayed the order of Tribunal.

The three substantial questions were:

1.     Whether the finding of the learned Tribunal on non-maintainability of complaint before RERA authority and appeal before the Appellate Authority against unregistered projects, is based on misinterpretation of judgment rendered by the Hon’ble Supreme Court in a matter reported in 2021 SCC OnLine SC 1044 in re: M/S Newtech Promoters & Developers Pvt. Ltd. vs. State of U.P. and others?

2.     Whether the finding of the learned Tribunal on non-maintainability of complaint before RERA authority and appeal before the Appellate Authority against unregistered projects, is against the provisions contained in the Real Estate (Regulation & Development) Act, 2016 and thus, is perverse and is unsustainable in law?

3.     Whether the learned Tribunal erred in giving finding that neither complaint before RERA authority nor appeal before the Appellate Authority would be maintainable against the unregistered projects, as the Real Estate Developers/Promoters would use it as a tool to not get their projects registered with RERA Authority in order to escape from the ambit of the Real Estate (Regulation & Development) Act, 2016?

In view of the above, High court stayed the order of Tribunal till the next date of hearing.