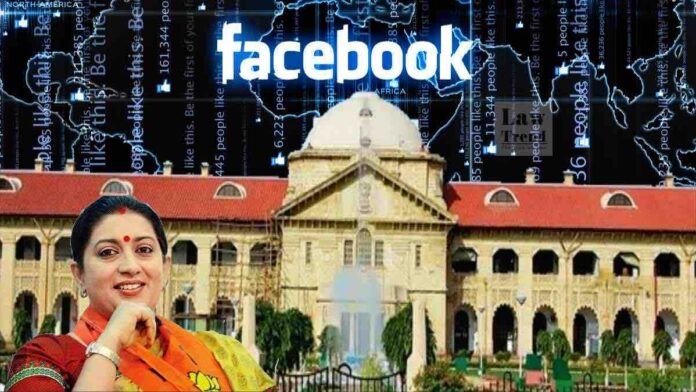 On Tuesday, the Allahabad High Court rejected an anticipatory bail plea filed by Dr. Shaharyar Ali, a Professor in a Degree College, who is accused of posting objectionable content on Facebook against Central Minister Smriti Irani.

Justice JJ Munir of Allahabad High Court rejected the Anticipatory Bail plea and observed that considering the fact that the accused is Senior Teacher in a college and Head of Department, therefore conduct of this kind prima facie does not entitle him to Anticipatory Bail.

The Court further observed that the contents of the Facebook post of the accused , which was shared by the Co-accused, Huma Naqvi, has the likelihood to promote hatred between different communities.

Dr. Shaharyar Ali, has been booked under Section 505(2) of IPC (Statements conducing to public mischief) , and Section 67A of the Information Technology Act, 2000 (Punishment for publishing or transmitting obscene material in electronic form).

The Additional Advocate General, appearing for the State, opposed the Anticipatory Bail application on the ground that the comment was obscene and that too about a Minister of the Union Government and a Senior Leader of a political party.

AAG added that the post of the accused was circulated on social media and had the potential to promote hatred between religious groups.

While rejecting the anticipatory bail application,without expressing opinion on the merits of the case, the court observed that no material has been shown to prove that the account of the accused was hacked, in fact the accused has apologised for the post from the same account, which indicates that the account is still operated by him.

The Court has clarified that in case, the applicant surrenders before the court concerned, his bail application shall be considered expeditiously and in accordance with law.