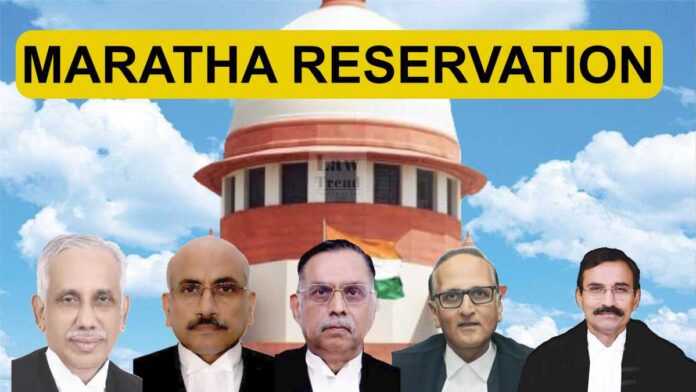 On Wednesday, a Constitution Bench of the Supreme Court struck down Maratha Reservation and while doing so the court observed that there is a presumption that all castes and communities have moved towards advancement, unless rebutted.

The Bench observed that after 70 years of Independence, the Governments at all the levels are taking effective efforts and measures to ensure overall development of all communities and classes. (Judgment by Justice Bhushan-Para 327)

Further the Court observed that nowadays people are aspiring for backwardness rather forwardness, which is not as per the constitutional objectives. (Judgment by Justice Bhushan-Para 328)

The Court held that

“Marathas are the dominant forward class and are in the mainstream of National Life”.

After going through the material regarding representation of Marathas in Government Jobs and Schools, the Court concluded that Marathas are adequately represented in State.

The Court found that from the data it is itself clear that Maratha Community has succeeded in Open Competition and got admission in all the streams of Education be it Medical or Engineering.

Further it was also noted by the Court that the percentage of Maratha Community in IAS, IPS, IFS shows substantial representation in prestigious Central service.

Affirmative Action Does Not Mean Reservation Only

The Supreme Court has suggested the Governments to think beyond reservation, as this is not the only tool for upliftment of society or community. The Court held that providing reservation to the weaker section is not the only method for their welfare. The Government should take other measures too such as concession in fee, creating opportunities os skill development etc.