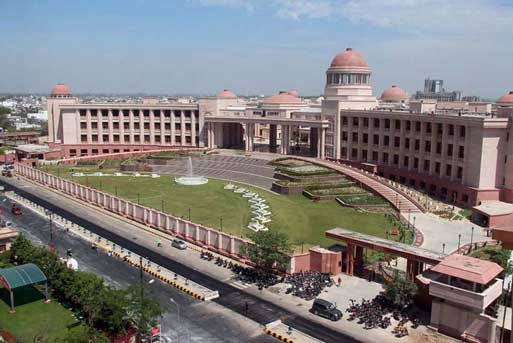 Today, a Judgment has been delivered by Justice Sangeeta Chandra of Allahabad High Court at Lucknow, regarding the power of Lucknow University to determine the fee of its private associated colleges and the eligibility of students to receive a scholarship on the fee so fixed.

Two Law Students of an Associated College of Lucknow University approached Allahabad High Cort at Lucknow under Article 226 of the Constitution, challenging the Rule 6(i)(a) and Rule 5(xv)(Gha) of the Government Order dated 20.9.2014, and Government Order dated 14.4.2016, with regard to release of scholarship and fee reimbursement amount. Further prayed was made to allow the petitioners to submit their examination form and take the forthcoming semester examinations of LL.B. Honours Five-years Course. Later on, the Petition was amended and some other prayers were added too.

Petitioners submitted that they were admitted in LL.B. Honours Five-years integrated Course of an Associated College in Lucknow. The course comprises of 10 semesters with two semesters every year and the course fee is Rs.25,000/- per semester i.e. Rs.50,000/- per academic year. The petitioners belong to General Category and have a very poor background as the annual income of their father is only Rs.48,000/- per year as per the Income Certificate issued by the Tehsildar, Musafirkhana, District Amethi.

Their argument was that the Petitioners took admission under the Scheme of 2012 as amended by the Scheme of 2014 (prescribing 60% marks for scholarship), in the academic year 2015-16 and, therefore, the amended Scheme of 2016 was inapplicable to them. The petitioners, however, admitted that they had obtained 58% and 57% marks respectively in Intermediate examination.

It was further submitted that only the State Government is empowered to fix the fee of Private colleges, affiliated with Lucknow University, not the University itself.

Opposing the Writ Petition the State’s Counsel submitted that due to Rule 5(xv)(Gha) of the Scheme of 2016, the petitioners were found ineligible for full fee reimbursement and scholarship.

It was further submitted that Executive Council of the Lucknow University has resolved that the fee determined through University Ordinance dated 25.5.2015 for its professional Self Financed Courses run within the campus of Lucknow University, should also be made applicable to private institutions running identical courses. A proposal under Section 52(3)(c) of the State Universities Act, 1973 has been made to the State Government for its approval, but it’s still pending.

Further, it was submitted by the State Government that excess fee had been mentioned by the College while verifying the Online Forms of its students as a result whereof excess money has been paid under the Scheme of 2016 to the College. Recovery notices have been issued by the District Magistrate, Lucknow/Chairman of the Scholarship Sanctioning Committee Lucknow.

The High Court at Lucknow after hearing the parties observed that the scheme was floated for helping “meritorious” students of un-reserved category whose guardian’s financial status was such as would prevent them from pursuing their professional courses smoothly.

It is apparent from a perusal of Rule 6(i)(a) that Benchmark for eligibility for full fee reimbursement and scholarship is securing 60% marks in Class 12th examination for those students who take admission in unaided private institutions, which run professional courses and in which, the criteria to give admission is on the basis of marks secured in Class 12th examination.

The Court observed that it had already considered the arguments raised by the counsel for the college and the counsel for the opposite party no.5 in a detailed order passed by it on 06.02.2020 where it had come to a conclusion that the University was competent in view of the Government Order dated 30.07.2018, for fixing the fee of five-years LL.B. Honours course being run by private colleges affiliated to it on the same terms as the earlier Government Order dated 25.05.2015. Under some misconception, the Registrar referred the matter once again to the State Government for approval which was not required, and therefore the matter remained pending. The opposite party no.6 being a private affiliated college, in view of the Government’s order dated 30.07.2018, the University is competent to fix the colleges’ fee on the same terms as the earlier Government Order dated 25.05.2015, and opposite party no.6 was entitled to charge the fee it was charging from its students.

The Court also held that since both the Petitioner had secured less than 60% marks, therefore they were rightly denied the amount of scholarship and fee reimbursement. Further the plea that they were issue reimbursement for First Year, was also negated by the Court on the ground that wrong cannot be perpetuated by another wrong.