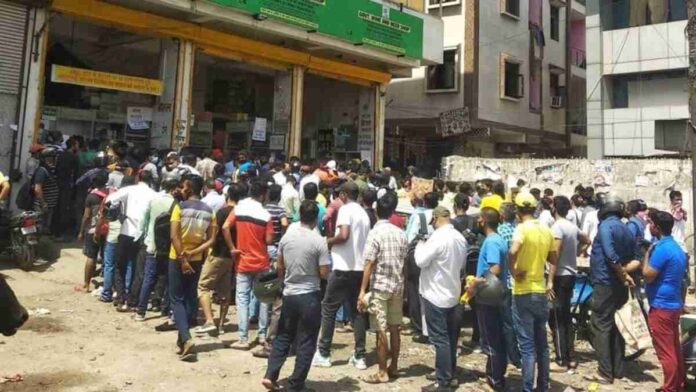 On Wednesday, the Kerala High Court issued directions to the State to file a detailed report regarding the failure to observe Covid protocol outside Beverage Corporation liquor outlets in the State of Kerala.

The Court directed the Excise Commissioner to file a detailed report regarding the failure to follow Covid guidelines in such shops.

A Division Bench of Hon’ble Chief Justice S Manikumar and Hon’ble Justice Shaji P Chaly issued directions. It cautioned the State by stating that currently, Kerala is No.1 Covid cases tally. The government is taking measures to control the spread by taking appropriate measures but crowding at public places like liquor shops should be stopped as Health was more important than revenue.

Advocate C Rajendran who appeared for the petitioners argued that since the government has directed bars to sell liquor at the same prices as Bevco outlets, most hotels and bars have stopped selling liquor as it affected their profits.

Earlier, the government had prohibited the sale of liquor at Bevco outlets due to the second wave and reopened the liquor vends in mid-June.

Since reopening, people have been crowding at Bevco outlets without following any Covid protocols.

A Judge wrote a letter to the Court in which he attached several photos that showed large gatherings and people standing in long queues outside liquor shops.

The Court noted that people were not following covid protocols, and as many of these shops were located on public roads and near residential areas, other peoples’ lives were also at risk.

However, the Court observed that despite directions from Centre and State, the instructions were not followed in letter and spirit. It further noted that the State had issued clear orders regarding the opening of Bevco outlets, and any lapses would be viewed seriously.

The Court pointed that no action was taken against defaulters so far and proceeded to direct the State and Excise Commissioner to file reports regarding the steps that they have taken.

The Bench will now hear the case on 13th July.