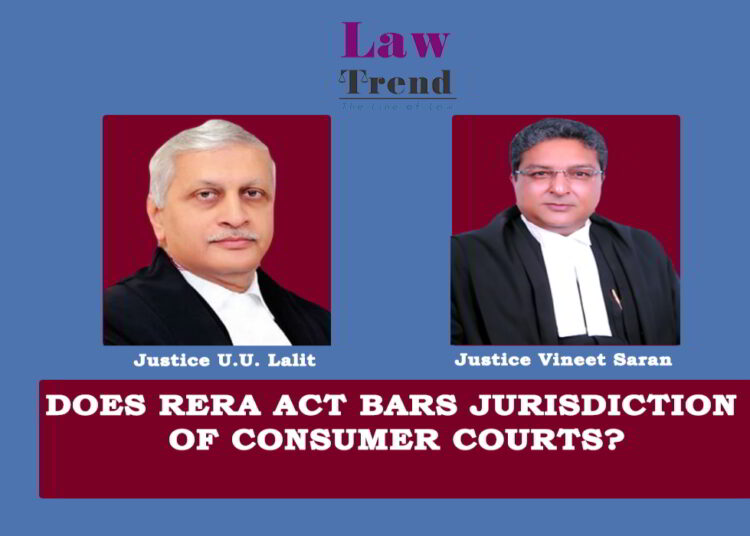 632
SHARES
1.8k
VIEWS
Share on FacebookShare on TwitterShare via WhatsappShare via EmailPinterest

Today the Supreme Court has given a significant Judgment of Home Buyers.

The Supreme Court has held that the Real Estate (Regulation and Development) Act, 2016 does not bar the Jurisdiction of Consumer Forums.

Therefore a Home Buyer can approach the Consumer Forum against the Builder for deficiency in service.

The Complainants had booked apartments with the Builder. They also entered into a Builder Buyer Agreement. Buyers paid the booking amount as well as the amount due from time to time. But there was no sign of the getting the project complete. Due to this, the Buyers approached the Consumer Forum.

The Consumer Forum allowed their Complaint and ordered that the Builder will refund the amount deposited by the complainants along with simple interest @9% p.a. A Cost of Rs. 50000/- was also imposed upon the Builder.

The Builders approached the Supreme Court by filing an appeal under Section 23 of the Consumer Protection Act.

Issues Before the Supreme Court:

The Division Bench of Justice UU Lalit and Justice Vineet Saran gave their Judgment on the issues mentioned above.

Supreme Court observed that Section 88 of the RERA Acts provides that the Act is in addition not in derogation of the provisions of any other law.

Court referred to the Judgment of Malay Kumar Ganguli vs Dr Sukumar Mukherjee, where the Supreme Court held that a consumer forum is not a civil court. Therefore the Court observed that Section 79 of the RERA Act does not bar the Jurisdiction of Consumer Forum from entertaining any complaint of the home buyer.

Supreme Court said that the Proviso mentioned above to Section 71(1) of the RERA Act, gives a choice to the home buyer to withdraw the Complaint and approach RERA authorities. But this provision does not force the complainant to withdraw the proceedings from Consumer Court and mandatorily approach RERA.

What if Complaint filed before Consumer Court after enforcement of RERA?

Supreme Court has held that where the Complaint has been filed before the Consumer Court after the enactment of RERA Act, there is nothing which bars the jurisdiction of Consumer Courts.

Section 79 of RERA Act bars proceedings before the Civil Court and therefore does not apply to the Consumer Courts.

Moreso Section 88 and 18 of the RERA Act clarifies the position. Section 18 provides that the remedy under RERA Acts is without prejudice to any other remedy.

Hence the intention of the Parliament is quite clear that the Home Buyer has been given a choice to initiate proceedings under the Consumer Protection Act or RERA Act.

Supreme Court also referred to the Judgment of Pioneer Urban Land and Infrastructure Limited and another vs Union of India, where it was held that the remedies given to home buyers are concurrent remedies. He can avail remedies under IBC Code, Consumer Protection Act, 1986a and RERA.

Supreme Court has dismissed the appeal of Builders and imposed a cost of Rs. 50,000/- to be paid by each Builder.

The Court, therefore dismissed the appeals, imposing costs of Rs.50,000 to be paid by the Builder in respect of each of the Consumer Case.