Difference between a Lawyer and an Advocate 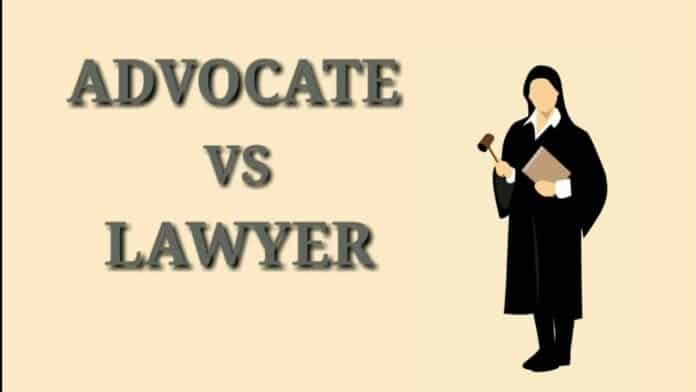 In the legal fraternity, the words ‘Lawyer’ and ‘Advocate’ are often used as synonyms. But it is pertinent to know that there are differences in the meanings of the two words.

Who is a Lawyer?

A lawyer is a basic term that refers to any person who has a law degree. There can be various types of lawyers, such as advocates, attorneys, solicitors, etc. All of these are considered to be specialists in different fields of law. A Lawyer can sometimes be not eligible to stand in a court to represent a client.

Who is an Advocate?

The word Advocate is usually used for a lawyer only. This is a person who has completed a law degree and eligible to stand in court on behalf of his/her clients.

Advocate” means an Advocate entered in any roll under the provision The Advocate Act 1961.

In basic terms, it can be said that all Advocates are Lawyers but all Lawyers are not Advocates.

For instance, after a student completes his law degree, he needs to give an exam conducted by the All India Bar Association (AIB). After clearing the exam, the student gets ‘Sanad’. Sanad is the eligibility criterion to practice in courts of law in India. Thus a Law Graduate who has a Sanad can be called an advocate.

In short, it can be concluded that a Lawyer who can represent clients in courts is called an Advocate. Whereas a lawyer who is not eligible to represent clients in court cannot be called an advocate. An advocate conducts a case in the court on behalf of his clients. Advocate is just a category under the term Lawyer. Thus, All advocates are Lawyers but all Lawyers are not advocates.

And Editor-in-Chief at Law Trend

With the help of: