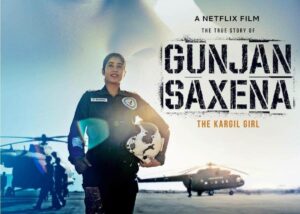 The Delhi High Court on Wednesday refused to stay the streaming of Netflix movie ” Gunjan Saxena – The Kargil Girl” after the centre claimed it depicted the Indian Air Force in a negative light. The centre alleged the movie – a biopic on the life of India’s first woman combat pilot – had dented the image of the Indian Air Force (IAF) because it showed the force as “gender-biased”. In response Justice Rajiv Shakdher of the Delhi High Court asked why, if the centre was concerned about the image of the IAF, it did not approach the court before the movie was released.

Justice Shakdher further said an injunction could not be granted at this stage as the film was already available online. The court has, however, sought a response from Dharma Productions Private Limited (the film’s producers) and Netflix on the centre’s concerns. The court said former Flight Lieutenant Gunjan Saxena should also be made a party to the suit and issued a notice to her, seeking her response as well. Last month the Delhi High Court also disposed of a PIL (public interest litigation) seeking direction to modify (or delete) dialogues and scenes that portrayed the IAF in a negative light.

Filed by an NGO called Justice For Rights Foundation, the PIL claimed that some scenes and dialogues were factually incorrect and misleading, and sought to glorify the character of Gunjan Saxena. The PIL further said that several male officers had been projected as misogynists.