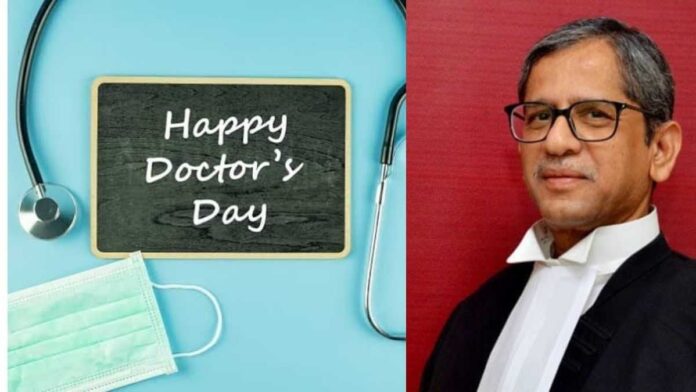 On the occasion of National Doctor’s day, Hon’ble CJI Ramana raised concerns about the brutal attacks that the doctors are facing while on duty.

CJI stated that it was saddening that doctors are being attacked while on duty and questioned why doctors were on the receiving end for someone else’s failure.

While referring to the issue of the country’s medical infrastructure, CJI stated that government agencies and medical bodies have to put their heads together to address the issue. He further stated that issues like the insufficient number of medical professionals, medicines and infrastructure, outdated technologies and medicines are not given priority from the government, and this was cause for immediate concern.

The Judge noted that the tradition of having family doctors is vanishing, and it was saddening that qualified and able doctors are unable to start their hospitals and survive. He also expressed how even after eight-nine years of rigorous training, doctors cannot earn a decent wage.

During the speech, the CJI acknowledged the selfless and tireless work that the doctors have put in during the pandemic. The CJI took note that more than 798 doctors lost their lives to the deadly second wave and condoled the death of the medical professionals.

CJI offered heartfelt sympathies and prayers to the families of medical professionals who had lost their lives and saluted the doctors.

Lastly, CJI Ramana quoted a poem written by a young health professional from the US and stated that her words reflected his pain.