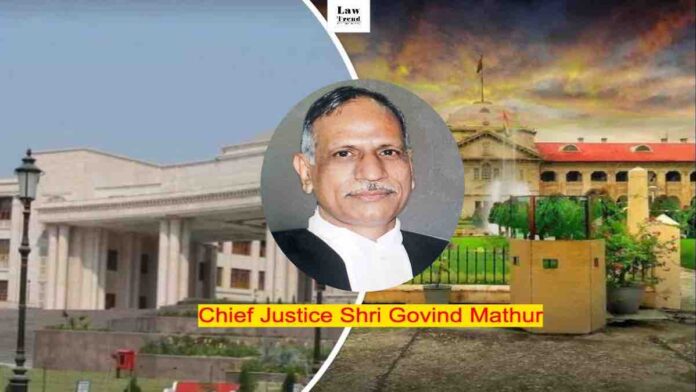 These challenges were successfully dealt by CJ Govind Mathur by introducing E-filing and Virtual Hearings.

Under the guidance of Chief Justice Mathur for effective implementation of service of Court Notice and to avoid delay, the Allahabad High Court launched National Service and Tracking of Electronic Processes Services (NSTEP).

During his tenure as Chief Justice, he delivered some very significant Judgements and he is known for upholding Fundamental Rights of Citizens by expanding the horizons of Judicial Review.

The Violence in AMU University due to agitation against the Citizenship Amendment Act was taken cognizance by the Chief Justice as violation of human right and an Inquiry was Ordered into.

When the nation was under lockdown, the Allahabad High Court was alive to the problems faced by the migrant labours. Chief Justice Govinf Mathur registered a suo motu PIL and directed that Government should appoint an officer for a group of 400 migrants to keep check at their health condition.

The bench headed by the Chief Justice Govind Mathur quashed the imposition of NSA on Dr Khafeel Khan and set him free. Dr Khan was detained under NSA for alleged speech on Aligarh Muslim University on Citizenship Amendment Act.

There are many Judgments like these where Chief Justice Govind Mathur has protected the fundamental and Human Rights of citizens.