Can a Lawyer Use His Home For Office/Chamber Purpose? 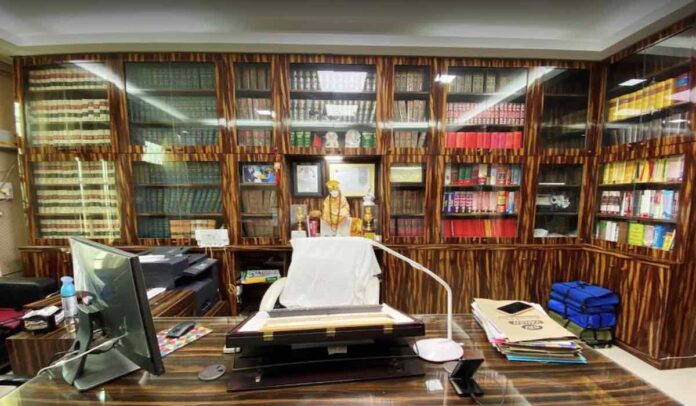 It is quite common and in most of the cases Lawyers/Advocates run their Office/ Chamber from their home (Residential Premises).

But this raises a question that whether using home or residential premises to run Office/Chamber of Advocate amounts to commercial activity and should be charged with commercial tax.

The purpose of Law in society is to maintain Order and preserve moral sanctity that holds the society.  Lawyers are officers of the court and one of the most indispensable pillars of the Justice delivery system.

Legal profession is a noble profession and absolutely distinct from business, commerce and trade. It is a professional service because it is very person-specific and based on skill and knowledge of the person.

Due to the nature of service, Rule 36 of the Bar Council of India Rules provides that the Advocate shall directly or indirectly not advertise, solicit work by by advertisements, circulars, touts, furnishing or inspiring newspaper comments or producing his photographs to be published in connection with cases in which he has been engaged.

Is Running Advocate’s Office from Residential Premises a Commercial Activity?

In the case of  V Sasidharan vs Peter and Karunakar AIR 1984 SC 1700, the Supreme Court held that an Advocate’s Office is not a ‘commercial establishment’, therefore no registration is required under the Shops and Establishments Act.

The Madhya Pradesh High Court in the Judgment of Shiv Narayan and another vs M.P. Electricity Board and Others reported in AIR 1999 MP 246 struck down a provision which classified Advocate under “Commercial” category for payment of electricity bill at commercial rate. The Court found this classification arbitrary, and violative of Article 14 of the Constitution.

In an appeal before the Supreme Court, the Judgment of M.P. High Court was upheld by the larger bench of the Supreme Court ( Civil Appeal No. 1065 of 2000- 27.10.2005) upholding that the domestic rate of electricity shall be applicable to the Lawyer’s office.

Most recently the Calcutta High Court in the case of Arup Sarkar v. CESC Ltd. & Ors. (W.P. 18367 of 2019 dated 11.02.2020) clearly held that an Advocate’s Profession is not at all commercial activity. If a lawyer is running his chamber-officer in his home that will not make it a commercial use of property.

In B N Magon v South Delhi Municipal Corporation the Delhi HC held that merely because an Advocate is running office from his home, does not make it a business building. The court referred to the Master Plan of Delhi 2021, in which residential premises can be used for professional activities by doctors, lawyers, CA, architects etc.

The Bombay High Court in the case of Rajendra G Shah vs Maharashtra State Electricity Distribution Company Ltd reported in 2011 SCC OnLine Bom 1038 held that the residential premises used by the professionals like lawyer, doctor etc for thier office purpose shall be charged as domestic usage for electricity tariff purposes, irrespective of the fact that professional activity is being carried out in said residential premises. But, if the said premise is used with another independent advocate and exclusively for the purpose of office, then it shall be treated to be a commercial activity and will be charged accordingly.

Similarly the Rajasthan HC in the case of JVVN Ltd and Others vs Smt Parinitoo Jain and another AIR 2009 Raj. 110 held that charging additional tariff on commercial basis from a Lawyer, who is running his office from home, is illegal. But it was also clarified that if the Lawyer is running office in an independent commercial space, then such accommodation cannot be exempted from commercial rates.

The Punjab and Haryana High Court in the case of District Bar Association Panchkula v State of Haryana AIR 2015 P& H 13, struck down the regulations of Haryana Urban Development Authority, prescribing fee for using home/residential premise as Advocate office. The Court observed that if an author writes a book and that becomes his source of earning, then can it be termed as commercial use?  The Court held that Profession of a Lawyer is also based on the study of papers, books, for which he maintains a library. Being a noble profession it cannot be a commercial activity.

In Delhi Pradesh Citizen Council v Union of India (2006) 6 SCC 305, the Supreme Court while dealing with Delhi local laws held that the professional activities by CA, Architect, Lawyers and Doctors cannot be carried on in excess of 50% ceiling of total residential area. Further such activity cannot be carried on by a person who is not resident of that residential premises.

From the above mentioned Judgments and relevant provisions of Bar Council of India Rules, it can be safely concluded that if an Advocate runs his chamber/office from his home, it cannot be termed as commercial activity. But this proposition is not absolute and subject to restriction by local law. Like the municipal authority can impose conditions of ratio of use of residential premises for home and office, also that the office can be run only by the person who is living in the home.

Further if a Lawyer runs his office/chamber from an Independent space, then it will be wholly commercial.