Can a Lawyer Appear Before the Court and Plead Case Without Filing Vakalatnama? 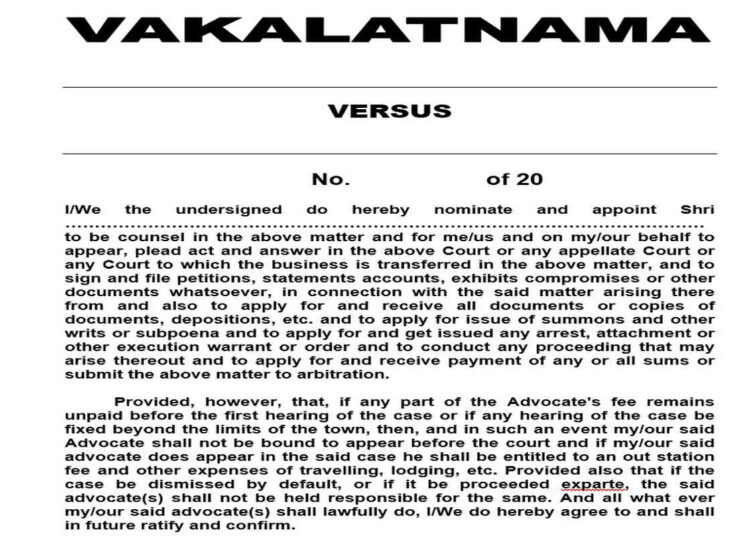 912
SHARES
2.6k
VIEWS
Share on FacebookShare on TwitterShare via WhatsappShare via EmailPinterest

In today’s post, we will discuss a fascinating question of law: Can a Lawyer Appear Before the Court and Plead Case Without Filing Vakalatnama?

To answer the question, we first have to refer to Order III Rule 4 of the Civil Procedure Code where it is mentioned that:-

A pleader can only plead the case of a party in a court only if he has filed his memorandum of appearance and has mentioned the names of the parties to the suit, name of the party who he is representing and name of the person who has authorised him to appear in the suit.

The Allahabad High Court Rules 1952, provides in Rule 3 that “Vakalatnama” means a document referred to in Rule 4 of Order III of the  Code appointing an Advocate to act for any person in  this Court.

2(1). An Advocate could not represent a person in Court unless he was appointed for appearing by the filing of a Vakalatnama or by an authorised person or under a Power of Attorney.

(2). An advocate who has been engaged for pleading shall plead on behalf of any other party unless he has filed a Memorandum of Appearance in Court mentioning the name of parties which is representing, names of parties to the suit and name of the person who has authorised him to appear.

It will be pertinent to mention that the rules as mentioned above will not be applied to Public Prosecutors or an Amicus Curiae who has been assigned by the Court to either defend a person in criminal proceedings or assist the Court.

It should also be noted that if an Advocate appears on behalf of the government or if a public servant is suing or is getting sued in his official capacity then filing a Memorandum of Appearance is sufficient, and Vakalatnama is not required.

In order to clarify the issue at hand, a reference can also be made to Jayant Madhav Chitale vs Garware Wall Ropes Pvt. Ltd., where it was held that as per Rule 4 of Order III, CPC if an advocate is appointed by a party to represent them in a case, then he can only appear only if a Memorandum of Appearance with all the relevant details has been filed in the Court.

However, there is also an exception, if the appointed Advocate engages another advocate to plead the case on his behalf. The appointed Advocate is not required to file his Memorandum of Appearance. This is backed by the proviso to Order 3 Rule 4 CPC, which reads as under

Provided that nothing in this sub-rule shall apply to any pleader engaged to plead on behalf of any party by any other pleader who has been duly appointed to act in Court on behalf of such party.

In such a scenario, the Court cannot insist that the appointed Advocate should file his Memorandum of Appearance.

The object of these provisions is to ensure there is speedy delivery of justice and to help the newly inducted advocates to learn the functioning of the Court.

To sum up, we can conclude that juniors or colleagues(who are also advocates) of an appointed advocate can represent a party without filing Vakalatnama or Memorandum of Appearance if the Advocate who had appointed them has obtained a Vakalatnama from the party.