[BREAKING] ALL HC directs Chief Secretary of UP to inform Court about measures taken to curb COVID-19, observes “When we have to balance between bread/ butter and life, the latter has to prevail” [READ ORDER] 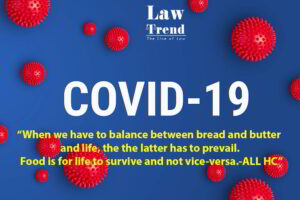 A Division Bench of Allahabad High Court comprising Justice Siddharth Verma and Justice Ajit Kumar, while hearing Public Interest Litigation No. 574 of 2020 made important observations with respect to the state of affairs in the State of U.P. for curbing the spread of COVID-19.

Through this PIL the Court is monitoring the actions and steps of State Government being taken to curb the spread of COIV-19 in Uttar Pradesh.

We have also noticed that both the police and the district administration have despite the directives completely failed in restricting the movement of people who are moving without business and are assembling at various commercial places including the tea stalls and beetal shops.

Law is meant for the people and if spread of virus COVID-19 can be contained by locking the people inside their homes, let it be, as it will not only save the lives of people in general but even will result in better use of government resources.

When we have to balance between bread and butter and life, the the latter has to prevail. Food is for life to survive and not vice-versa.

We do not think that a lock down for a fortnight would bring the economy of the State to such a halt that people would die of hunger. Putting people to challan/fine and then letting them go and the insufficient police force to do round the clock patrolling in lanes and by lanes in the district not only consumes public measure and machinery but minimal results are being achieved.

Thus, in our opinion the best choice today is to close down things for a while though selectively, to force people to confine themselves to their homes.

Under such circumstances we direct the Chief Secretary of State of U.P. to give the following information to the Court:-

(i) Was there any plan of action to contain the infection when the economy was re-opened?

(ii) If there was any plan of action then was it ever implemented?

(iii) Orders which have been issued from time to time by various districts in fits and starts show that there is no central planning which might have been implemented. Individual orders are being issued by administrative officers in separate districts as per their discretion. The Chief Secretary, therefore, to inform if there was any planning done for the whole State of U.P and whether the enforcement by the authorities responsible for the whole State had taken any action.

(iv) The Chief Secretary to also inform if any action had been taken by the Central authority to punish authorities in the districts who had not followed the planning, if there was any, by the Central Agency.

(v) The Chief Secretary to, therefore, come up with a Road Map, in view of what has been observed by us in this order, to contain the contagion from now onwards by the next date.

Considering the urgency involved in the matter the Court posted the case on 28 August 2020 at 2:00pm. On the next date fixed, the Chief Secretary, Uttar Pradesh, has been directed to file an affidavit and provide the information asked for.