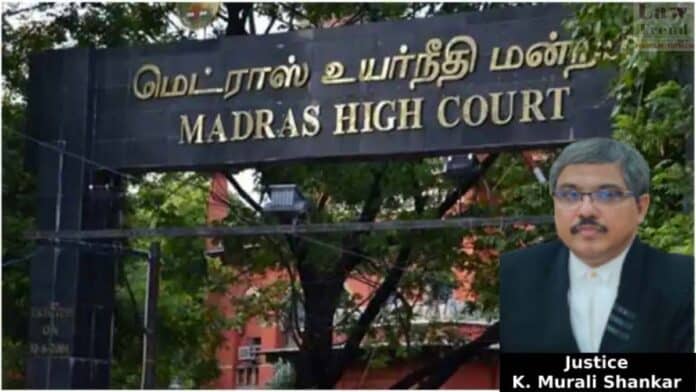 Recently, the Madras High Court expressed displeasure at the Karaikudi Bar Association’s act of passing a resolution as per which no person will represent the accused in a certain case.

The court ruled that such a resolution was null & void, illegal and has no force in law. The court further said that even in the case where the lawyer is attacked the bar association is not expected to pass such a resolution that violates the constitution and the law.

These observations were made by the Bench of Justice K Murali Shankar while considering the bail pleas moved by three accused who were in judicial custody and were booked u.s 294(b), 307, 427, 324, 448, 506(ii) and also u.s 4 of Tami Nadu Prohibition of Harassment of Women Act of 2002.

Before the court, the petitioners submitted that the bar had passed a resolution stating no lawyer will file bail for the petitioners and when a lawyer from a different district tried to appear in the case, local lawyers prevented him from appearing in the court because of which the bail plea was dismissed for non-prosecution.

At the outset, the High Court remarked that the circumstances of the case are unusual as the petitioners are being prevented from appearing before the Magistrate and as mentioned in Vinod Kumar vs State of UP & Anr a bail plea can directly be filed in the High Court if there are special circumstances.

Regarding the Bar resolution, the court referred to Mohammed Rafeeq vs the State of Tamil Nadu wherein it was observed that no matter how depraved or degenerate a person is he/she has a right to be defended in court.

Observing thus, the court granted bail to the petitioners and also asked the said Bar Council why they should not be derecognised for their actions.

To this, the council replied they took the step as an act of solidarity with the lawyer but assured the court that such a resolution will not be passed in the future.

The Bench was satisfied with this explanation and disposed of the case.

Title: Ganapathy & Ors vs. the State

BCCI is Liable to Pay Employees’ contributions under the ESI Act: Bombay HC

Parity of Bail Cannot be Sought Where Bail Was Given Without Assigning Any Reason: Allahabad HC

When an Arbitral Award Can be Set Aside by HC in Writ Petition? Explains Chhattisgarh HC